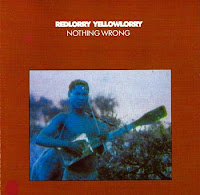 Of the 200+ records I have posted heretofore, it is safe to say that I endorse Red Lorry Yellow Lorry's third album, and in my opinion, masterstroke, Nothing Wrong head and shoulders above the rest. When I discovered this album in 1989, it was an enormous revelation to me, and one of the defining pieces of music that implored me to fully immerse myself in the world of "alternative" or "modern rock," and I've never looked back.


To give you a little background, Red Lorry Yellow Lorry (named after a none-too-challenging tongue twister) were a Leeds, England quartet, formed in 1981 by vocalist Chris Reed. Longtime guitarist Dave "Wolfie" Wolfenden jumped aboard a litte later. They would comprise the Lorries core-lineup through their fourth album, 1989's Blow. Virtually from day one, RLYL were lumped into the burgeoning British Gothic rock scene, much to their dismay and confusion. To make matters worse, they were, and remain perennial footnotes in this so called "movement." By and large, their first two albums, Talk About the Weather (1985), and Paint Your Wagon a year later, along with a slew of crucial early singles (released almost entirely on the Brit sh Red Rhino imprint), was the allotment of their discography most revered by critics and old school Lorries devotees. Overtones of Joy Division were fairly evident, but the Lorries busier and more robust arrangements aesthetically put them in league with contemporaries Killing Joke, and to a lesser extent the Chameleons UK.


The album in question, Nothing Wrong, was RLYL's debut major label offering. Released on Beggars Banquet/Situation Two with distribution through RCA on both sides of the Atlantic, the band's ever changing rhythm section included bassist Leon Phillips and skinsman Mark Chillington for the recording, but would be altered once again on the coinciding tour.


There is an inescapable semblance of doom and anxiety that courses through nearly every vein of this album. Trouser Press magazine opined that Reeds lyrics on Nothing Wrong were "straight out of an Existentialism 101 textbook." A charming observation in retrospect, but Reeds droney, deadpan vocals further bolstered such comments, yet they add to the magic. The Lorrie's other main ingredient, Wolfie, carves out a vast, echoing canyon of fretwork, glazing prime cuts like "Hands Off Me," and the bustling "Open Up," with a dense and an enthralling vigor that take firm command of the senses. Topping that off is Chillington's unremitting drumming, nearly as pounding and rhythmically intense as the bludgeoning din of a freight train, and to very appropriate effect I might add. Nothing Wrong is all about atmosphere - raw, bleak and foreboding as it's convincingly represented herein. Thematically, RLYL outline the cutthroat nature that is the modern world, but underlying all the insanity and pressure it entrails, perseverance can, and usually does prevail. For me, this record took on a life of it's own, and remains not only one of my top-10 album picks of the '80s, but all time.


As you will no doubt discover, Nothing Wrong features occasional dialogue from African Bushmen on a few tracks, from a British TV documentary, Testament to a Bushmen. Still trying to figure this one out myself folks.


Nothing Wrong was released in the US as a 14 track LP/CD. The British CD incarnation lops off two cuts from the domestic version and substitutes them with three b-sides. I've posted the US version in it's entirety, along with the three b-sides as an addendum. Out of print for years, Nothing Wrong was reissued in 2001 with the Blow album on one uncomfortable CD, that omits many tracks to accommodate the 80 minute time constraint. Not recommended, if you hadn't already guessed. After Blow, RLYL capped things off in 1992 with a final album, Blasting Off, which boasted a completely revamped lineup. In 2004, Chris Reed corralled a few hired guns for Red Lorry Yellow Lorry version 2.0, that resulted in a handful of UK gigs and precious little else. A one-off reunion show is scheduled this August as a tribute to the recent passing of Red Rhino Records proprietor Tony K.


Myspace action: http://www.myspace.com/redlorryyellowlorryofficial
band bios (aside from the official website can be found here and here.

Wow, thanks for this. "Hard-Away" is such a fantastic track.

"Hands Off Me" and "Pushing On" get my blood pumping, the latter having a great spaghetti western vibe. Bitchin. So glad to see 100+ downloads in just 48 hours!

any chance of posting 'blasting off' as well? please?

I completely agree - this is RLYL's masterstroke. I discovered this band in 1988 on MTV's 120 Minutes (Only Dreaming), snatched up the album, and have been hooked since. My band is actually covering "Hands Off Me" at a party coming up in September. Great album from start-to-finish. Favorite tracks also include She Said, Big Stick, and Another Side. Nice review!

After scoring a copy of this album along with Blow in a double album set years ago, I have to agree wholeheartedly with your assessment.

RLYL was, most unfortunately, an afterthought for me for some years. I was late to the party and really wasn't immediately familiar with them until after their heyday had passed. After listening to this album a few times through, I was immediately hooked, but really didn't acknowledge the beauty in the simplicity of what I was hearing; that is, it didn't translate immediately that these guys had hooks, timing, and taste that some of their more popular contemporaries often struggled to pull off. At the time, they didn't impress me as being anything more than the other bands of similar ilk that I was into. All these years later, I find myself going back to the album again and again (while other more well-known albums continue to collect dust), and I now fully appreciate the significance of what this band was doing. This collection of tracks, along with those featured on Blow, rank up at the very top of my list, not just for the given genre, but for music in general. Listening to it now, I cannot fathom how AllMusic and Rolling Stone could only muster 3 or less stars on the material of that time (the latter having long ago forfeited all authority on what is artistically viable, IMO, I suppose it isn't too surprising).

My big fave is the seldom-mentioned "World Around". There is something about that track that just makes me want to move. Coincidentally, it shares its title with a classic song by an equally woefully-overlooked and oft-ignored British supergroup, LEVITATION, of whom I am also a rabid fan.

I also love the soaring feel and rolling cadence of "Never Know". As an artist, I am continuously fascinated by trends in creative endeavors, and how threads of similarity often independently bubble up out of the ether in numerous ways simultaneously. Musically, "Never Know" strikes me as somewhat of a parallel to the type of arrangements Jane's Addiction would end up releasing that very same year, though neither could have realistically been an influence on the other. Coincidental for sure, and a testament to the creative receptivity of great minds on both sides of the pond.

Terrific review, and I endorse your perspective 100%. Many thanks for sharing the full release, as well, because several of those tracks were excluded from the version I have.

I love your blog and taste in music. If you endorse this album so highly i would love to hear it. Any chance of a re-up? Thanks!

Hi, there. Would you re-up this when you get the time? Thanks!

happy new year, can you reup this on yoour monthly updates
cheers