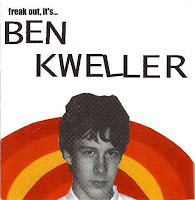 The 21st century has been some mighty slim pickin's for raw talent. It's not as if there is a dearth of bands of personalities, rather those that spark a visceral charge, at least for me. One glaring, and very thankful exception is Ben Kweller. A singular voice to say the very least, Ben cut his teeth in a Denton, TX-based post-grunge outfit called Radish, who were signed to a major label when he was just a scant sixteen-years old. They released an album, Restraining Bolt in 1997, but main Radish, Ben Kweller was about to pick himself off the vine and head to the east coast. It was when he started banging out his first solo songs a year or so later that the sensitive, endearing singer-songwriter came to the fore.

In 2002, Ben Kweller's proper solo debut album, Sha Sha was released, and it stands as perhaps my favorite rookie effort of that year. Shortly thereafter, it slowly began to leak out that Ben had assembled a series of self-released (and assumedly self-financed) CDs prior to Sha Sha. To this day I have been unable to obtain original copies, and truthfully I gave up several years ago. Via the miracle of the www, and not the least of which, file sharing platforms, I found two eps from 2000, Bromeo and Freak Out, It's Ben Kweller. Bromero features eight songs exclusive to it's release, with the exception of "I Don't Know Why," which oddly didn't resurface again until his 2006 self-titled third album, and "Different But the Same," which found it's way in a re-recorded incarnation on 2004's On My Way. Hmmm. Freak Out... on the other hand houses a quintet of songs that would appear in altered versions on Sha Sha. Strangely enough,the ep version of the melancholy piano ballad, "I Other Words," is more ornate than it's album counterpart. Hmmm. Sixteen songs between both of these recordings, and they're all quite commendable. Enjoy. You can browse a very thorough Ben Kweller discography right here.
Bromeo
01. I Have the Power
02. Panamanian Girl
03. Debbie Don't Worry Doll
04. New and Improved (Loladododo)
05. I Don't Know Why
06. Different But the Same
07. Concentric Town
08. Until I Die

great post... thanks for the bromeo EP... never could find it.

feel free to check out my lesser blog... bargainbinclassics.blogspot.com (if youre into it, a link would be mucho appreciate-o)

I'd never even heard of "Bromeo" till now. I saw Kweller open for Evan Dando in November 2001. I'd never heard of him before, but he was great, and my then-girlfriend ended up buying "Freak Out" after the show while I bought "EP Phone Home," which contains versions of "How It Should Be" and "Debbie Don't Worry Doll." I wish I'd bought "Freak Out" since it was the rarer commodity, but after not finding it on the file-sharing sites three years ago, a nice person on the EvanDando.co.uk message boards burned me a copy.

I think the "Freak Out" songs that were rerecorded for "Sha Sha" are superior in their original form. On "Sha Sha" it seemed like the shorter "Freak Out" songs were lengthened for the sake of making them potential three-minute singles. "Sha Sha" and "On My Way" both had some good songs, like "Hospital Bed" and "I Need You Back" on the latter, but "Ben Kweller" was disappointing, despite it being a one-man affair like "Freak Out." When the next album comes out early next year I'll be slightly curious but not much more than that. I feel like Kweller has loads of potential but just hasn't quite connected yet.

Thanks for posting both of these!

Like you I found out about the self-released albums just after Sha Sha came out (and eventually managed to track down CDRs of all of them). After Restraining Bolt, Radish recorded what would have been their "Sha Sha" album with Bryce Goggin.. I think a total of 18 tracks were recorded. 10 of them were put out in 2000 as BK's original self released "Sha Sha" CD, and the version of In Other Words that's on Freak Out is the same as the one on the self-released Sha Sha. "Launch Ramp" was also released on EP Phone Home.

Did that clear anything up or did I just confuse you even more?

I was a little disappointed with the self titled album too, but mainly because I'd heard 4 of the 11 songs in earlier incarnations first. The rest of the material wasn't by any means bad, but I think BK sounds best when he's just playing with a full band behind him (by all accounts how he recorded the first 2 albums and the upcoming one).

His new album is going to be a 'country' record.. there's a live recording from 4th July '08 that has about half a dozen new songs; the whole set is played with a lap steel guitar player, and it's left me very much in anticipation of the new record!

Have been wanting to hear 'Freak Out' since a guy in a record store told me the tracks on it were better than the 'Sha Sha' versions. Many thanks!

I found a copy of Freak Out It's... Ben Kweller at a used record store in Northampton Mass for $5. One of the best days ever.

Do you happen to have the Radish album Discount Fireworks? I've been wanting it for forever, I downloaded the song Cally on Kazaa years ago and haven't been able to find it since.