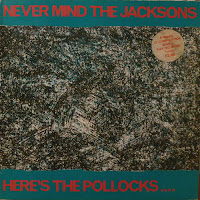 Well, this Brit eight-pack is certainly more dangerous than anything the Jacksons ever brought to market (collectively and otherwise), but some of the sub-rosa participants contained within inch considerably closer to the Sex Pistols realm.  Case in point would be the warbler for The Three Johns, who kicks this thing off bearing a strong resemblance to John Lydon's quivering wail, circa Second Edition.  Their track is promptly followed up by the even more avant Five Go Down to the Sea, but the real keeper on side one belongs to The Word, whom meld conventional new romantic aptitude with a hint of Echo and the Bunnymen.  I should also mention the Word's jangly chords anticipate the C86 indie movement that would soon be sweeping their home turf.

Overall side two wins this match, commencing with a hot Peel Session take of New Model Army's "Small Town England."  The next tune, courtesy of The Gymslips was also cut for John's fabled hit parade, and is enough to renew anyone's faith in the girl-group contingent of the wave/punk arena.  The Bomb Party deliver a frothy, pounding surge akin to Red Lorry Yellow Lorry, albeit with more frivolous subject matter.  The concluding  "Violation," an offbeat spoken-word piece by Joolz, plays out like a small portion of a greater narrative, thus making for a decidedly confusing end to otherwise appealing compilation.

A reupload of this would be SOOO appreciated!

could it be updated again? :)