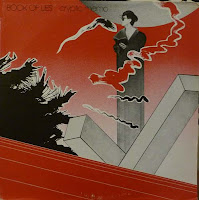 I caught wind of this thirty year-old relic just a few months ago.  Upon receiving it in the mail I learned that the Chicago area-Book of Lies had the good fortune of hiring the services of the late, great Iain Burgess, who has his name strewn all over this thing, including a co-production credit.  Cryptic is a fairly accurate one-word summation of the Book's modus operandi, but "oblique" is even more befitting.  Billed and depicted as a trio on the back cover, but with some songs credited to a quartet of musicians inside, prime mover Preston Klik leads his troupe through four pieces of curious, art-damaged (anti)pop, boasting a sonic ken well ahead of their time.  Book of Lies wield an avant angle that's dense and lithe as all-get-out, and if fact, the only parallels I can faintly draw might be to Japan, or Perry Farrell's pre-Janes outfit Psi Com.

The opening "Book," with it's abstract spiritual connotations, doesn't make for the best intro, but the remaining three songs compensate, some of which possess a surprising measure of warmth coming from such a mangled delivery system.  Bass (quite possibly of the fretless variety) is quite prevalent throughout.  Those who are capable of feeding off of Cryptic Memo's crooked energy will find the mystique of this record enthralling.  A Google query, believe it or not, conjured up this brief write-up in the New York Times:

On ''Cryptic Memo,'' the Chicago- based rock trio Book of Lies purveys a funk-oriented, densely mysterious and quite original sound, and answers an old question: ''Who wrote the book of love?'' These folks claim they wrote it, and that it's really a book of lies. ''Cryptic Memo'' is available in new-wave and import stores...

recently upgraded my used copy to a Sealed copy. Haven't listed to this in years, so looking forward to spinning it and reading your review again. good one!

This could have easily fallen into your realm, but I guess I beat it to you this time ;) Do you know if the Book of Lies had anyhing else out?

Your blog is great visually, I mean people wont be bored. But others who can see past the videos and the layout wont be so impressed with your generic understanding of this.
acylic letters stuck direct to the wall

fort worth fitness center, This site is excellent and so is how the subject matter was explained. I also like some of the comments too.Positive site, where did u come up with the information on this posting?I have read a few of the articles on your website now, and I really like your style. Thanks a million and please keep up the effective work.

toronto landscape designers, I would really admire the work and efforts you did to make this blog wonderful and spectacular thanks keep post I wanted to write a quick note to express my thanks. I’m really impressed by a blog unique and perfectly chosen and organized!

landscape lighting toronto, Interesting point of view and I agree with most of what you say.You've made some valid points and I think you're spot on.

burleson surgeons, Most of us are thankful to be working, and accept whatever the company gives us.

markham landscaping, Thank for your writing. I think this give more information which is very popular nowadays.

parkeren schiphol, What a great discussion! I'm so delighted to find other people who care about this topic, which I've been puzzling over for a while. Thanks

Burleson gym, What a great discussion! I'm so delighted to find other people who care about this topic, which I've been puzzling over for a while. Thanks

lawn sprinkler systems, Very cool entry and I so satisfied that I have found this useful information. I will definitely bookmark your site and visit this website again in the future. Thanks a lot for posting this valuable info for us. King regards!

landscapers toronto, Very cool entry and I so satisfied that I have found this useful information. I will definitely bookmark your site and visit this website again in the future. Thanks a lot for posting this valuable info for us. King regards!

toronto landscape design, This kind of information is rare in the internet. Very helpful post. I have been looking for it about a week

14 Day Detox, This kind of information is rare in the internet. Very helpful post. I have been looking for it about a week

I'd just like to say that your website is absolutely awesome and I've subscribed to it :) But if you'd be courteous enough to check out my website then I'd really appreciate it. GamesEpic allows you to download all of the latest games completely free, click here to get your free Football Manager 2015 Download now! Or if not then please go ahead and check out our sister site and get your free The Sims 4 Download