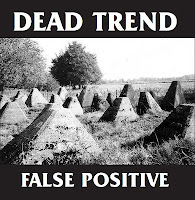 How’s this for a statistical dichotomy.  Dead Trend, a New England hardcore/punk conglomerate originating from the Reagan era (and known for making a point of reminding us of such) took 21 songs they had penned between 1986 and 2003 (27 years for those of you keeping track at home) into the studio this January and committed them to tape in the span of seven hours.  This quotient somehow never ceases to boggle my mind, and had I not already given away their genre of choice, most of you would have probably put two and two together.  Oh yeah, one more part of the equation - Dead Trend squeeze said 21 tracks into False Positive's roughly 26 minutes.

While their Facebook bio posits that Midwest wrecking crews such as the Zero Boys and Necros were D/T's inspirational antecedents, I'd argue these guys had their collective gaze much more situated on the creme de la creme of the SST Records roster, particularly Black Flag and early Husker Du.  Bear in mind, Dead Trend were contemporaries of that pivotal pair, and being that they had a nearly three decades-old backlog of songs to tinker with, don't be surprised to hear such themes as the Iran-Contra Scandal and the 1983 invasion of Grenada brought passionately to the fore.  The often brusque and acerbic False Positive, doesn't necessarily scale the heights of say, New Day Rising and Damaged, but a similar aesthetic is nonetheless baked into Dead Trend relentlessly vigorous cake.  As an additional SST Records tangent to make note of, Mike Fournier (one fourth of the D/T roster) was responsible for penning an installment of the 33⅓ paperback series, specifically the one dedicated to the Minutemen's landmark double LP Double Nickels on the Dime.

False Positive is slated for availability on Bandcamp May 7th (this Tuesday).  CDs will also be a purchase  option, though I need to verify if any vinyl is being printed.  You can listen to a portion of the album on B/C, and I'm also making a two-song taster available below.