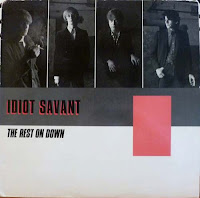 Yet another band to crawl out of the Minneapolis underground in the mid '80s, although Idiot Savant had precious little in common with the "holy trifecta."  Instead, this foursome opted for occasionally quirky left-of-the-dial wave/pop type stuff (hold the keyboards, thanks).  Kent Militzer peels off some jagged and sinewy guitar lines when he gets the notion to, but mouthpiece Brian Drake is the consummate and dominating personality among these six grooves.  The Rest on Down was followed up by a full length, A Finger Through the Floor of Heaven a year later.

Out of curiosity, who represents the "holy trifecta". I have this album from Dad who owned a bar in Mankato and, at 9 yo, I remember really liking this album.

any Chance to re upload the Album?