The Wolfhounds - Unseen Ripples From a Pebble (1987, Pinky) 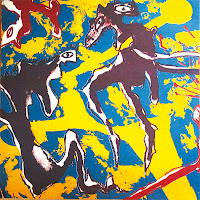 Before I part for a trip to witness the band this entry concerns, I couldn't resist sharing the very album that endeared me to them.  The Wolfhounds are a British aggregation who came of age in the C86 era, and were fittingly featured on the seminal NME issued C86 cassette compilation in 1986.  Not only were they a custom fit for such jangly and bittersweet sonic environs, the Wolfhounds espoused an ethos that was utterly quintessential of that short-lived mini movement.  Their premiere full length, Unseen Ripples... manages to resonate crisply and buoyantly a quarter century after the fact, striking a balance (albeit unintentionally) between what the Smiths and Mighty Lemon Drops were projecting, couched in a demonstrably more humble DIY context.  IMO, the earliest Hounds records were the most appealing, and there were several singles and EPs surrounding this album.  The band parted ways in 1990 after releasing their third album, Attitude, but reconvened in 2005 for a reunion concert, and again in 2012, which also saw the first new Wolfhounds record in 22 years, Cheer Up.  A sizable portion of their back catalog is now available digitally on iTunes and Emusic.

I should also point out this isn't my rip of the album, so a hearty thanks to whomever went to the trouble of digitizing this.

been looking for this for ages, THANK YOU!!

Great but how can I listen to it as it does not seem to get "read" by my mediaplayer?

Hi Steg. Not sure what to recommend. You may want to try Winamp or Foobar, which are both reliable MP3 players.

The Wolfhounds are making their first Medway appearance on 25th July at our Homespun independent music festival.

Bob (from the Dentists)