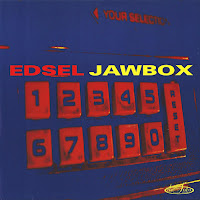 Was happy to oblige a request for this classic split screen of a 7" which is about to enjoy it's twentieth anniversary sometime this year (I want to say summer, but don't hold me to that).  When this hit the racks in 1993 I was quite the drooling Jawbox fanboy, and I was totally lamenting the fact that the coolest band in D.C. was about to embark on a major label venture.  Turns out I had little to fret over, and in fact, this wax offered a preview of their suprisingly uncompromising third album 1994's, For Your Own Special Sweetheart.  By mainstream standards "Savory" was dark, tense, and at least moderately dissonant, yet it felt like a comfy pair of moccasins to my ears.  Later re-recorded for Sweetheart, the variation appearing here is almost note-for-note identical, albeit a tad slower.  As for the abrupt ending, I believe it's by design.

I became an instant Edsel convert upon encountering their half of the obligation, "Penaluna," which boasted a a heavily phased guitar technique, mimicking a woozy keyboard effect (or so my mind likes to think).  Throw a murky sonic mystique into the mix, top with a succulent chorus hook, and you have a mighty tasty post-punk confection on your hands.  I did a write-up for the Edsel album this would soon appear on, The Everlasting Belt Co., and though I had to pull the link, it has been reissued.

Thank you! I might almost prefer both of these versions to their studio counterparts.