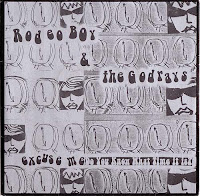 A chunk of splitsville action coming at ya, this time from a band with something in common to one I introduced you to just the other night, What Now.  As was the case with them, the Godrays have strong ties (two in fact) to Small Factory.   The 'rays involved exactly two thirds of the Factory, specifically mouthpiece/guitarist Alex Kemp and drum-wrangler Phoebe Summersquash.  Their double 7" ep, Songs for TV Stars showed up on Wilfully before, but I couldn't let this split single get away, especially considering it offers two exclusive cuts, both of which hit a slightly more dissonant stride than say, their album, also called Songs for TV Stars.  The second of the two Godrays selections, "The Thrifty Heart Song" is a Rodeo Boy cover, who also reciprocate with a 'rays song ("Vampires Suck") on their side of this torrid 7" affair.  While we're on the subject of Rodeo Boy they made a sweeter impression on me here than their (at least the few I've heard).  "Another Chorus Comes" is like Pavement meets Figgs, and really makes me want to re-investigate their back catalog.  Cool beans.

Godrays
01. Kick It Around
02. The Thrifty Heart Song