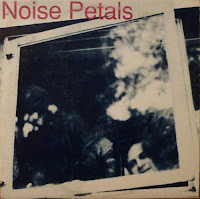 I wasn't aware of it at the time of purchase (or for that matter when I took it for an initial test drive), but Noise Petals was commandeered by Jeremy Toback, who would in five years go on to rock the four-string (and occasionally take the mic) in Brad.  Yes, that Brad, the Pearl Jam splinter project involving Stone Gossard.  Okay, I get it.  If you're not exactly starstruck by this revelation you're completely forgiven.

As for the record at hand, I was anticipating just about anything, but was hoping for something a la the Replacements or REM.  Instead, Noise Petals revealed themselves to be a nondescript collegiate guitar rock quartet, whose most prominent attribute fell to Toback's consistent bass poppin' forte.  Noise Petals vaguely suggests Me and Mr. Ray-era Miracle Legion, but that's about as specific I can get.  To my knowledge, this was the band's first (and last) will and testament.