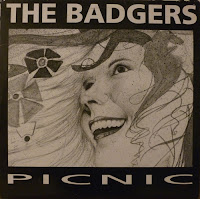 Well, well, if it isn't another cold case.  The Badgers were a Brit four-piece who unfortunately adopted an already ubiquitous moniker, making for a rather aggravating search engine query.  That aside, mouthpiece Emma Hewitt possess glass-shattering pipes, which fortunately for us dovetail well with Robin Jeynes echoing guitar fills, especially on the furious title track, and the nearly as fervent "Ragged Jack."  The most obvious comparison I can draw would be a group equally as arcane, The Millions, who I featured way back in '09.  Shades of the Sundays filter through the curtains on the sleepy "Rejuve," and much fainter glints of Tsunami and the Spinanes peer in as well.

Sorry for the deletions. What I meant to write was...I corresponded with this band back in 1992. They'd actually recorded an album but split before it could be released. I begged them for a tape of it but it didn't materialise. What a shame - a potentially great lost lp.

Great to hear this again. I corresponded with the band back in 1992. Tantalisingly, they'd recorded but imploded rather acrimoniously before it could be released. I begged them for a tape of it but sadly it never materialised. A potentially great lost album.

This is really good.... Thanks for the heads up as always

Do you know, it's funny: I had much the same experience as David, even getting a Christmas card from the band.

They were due to play a show in London and I went to see it but they had split, really at such short notice that the show didn't go ahead and yes, no album. It was, I believe going to be called 'Giants at Sea'.

I could offer full essays about the people in this band. I was once in it.

I last saw them over a decade ago in the flesh. Never cared for the record greatly: I found it twee at the time. Though I tell you this, the guitar work on that EP never came close to capturing the incredible talent of Robin Jeynes. Nowhere near.

By the way, w/ reference to the OP comment regarding the generic name - This band was originally a two piece called The Railway Badgers

It was Rob Jeynes on four string guitar. He learned bass first then moved to guitar w/ the first four strings in position 2 to 5 before eventually moving to the full six; and Luke Bartlett on bass and occasionally guitar. Both Luke and Rob wrote the lyrics and music, there was no rhythm section for many a year- and these boys bashed it out bedroom style for quite a time before people came and went and the line up settled - and a 12" was made.

There was another member - but only for the briefest of periods - Tony was his name - and he was a Scot. I forget his surname. He had a fair amount of talent, though I recall a volatile character.... He left. I recall speaking to him a while after he parted company and friendship w/ the band. He was bitter.

Wracked my brain for hours trying to remember Tony's surname - but it's long gone.

The only thing I remember about him was that once, at Tony's parents' place in Sculthorpe, North Norfolk, legend has it that Tony entered the room w/ a silver platter w/ the typical half sphere one would use to keep a turkey warm on top of the platter. He raised the top and declared something along the lines of: Tonite, it's Sculthorpe Surprise! Which was in fact a freshly curled turd garnish w/ herbs...

Rob's major influences - I recall - were Kitchens of Distinction; XTC; obviously The Smiths.

There was another band extant at the time that were also from the local North Norfolk area. They were The Volunteers. They also had a 12" on the Wilde Club label and often played at The Norwich Arts Centre, as did The Badgers on occasion. I think this aged better. Maybe. Long lost that disc.

Hey White Boots. Thanks for commenting. I really appreciate all the background info regarding your band. Wish I could have seen you live back in the day.

Who are you white boots?