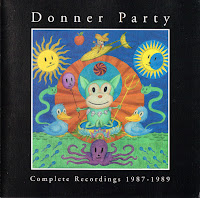 After some coaxing by one of my readers, I've decided to share this collection in it's entirety, as opposed to merely the album's worth of Donner Party tunes I put up as one of my Mystery Monday features a few weeks ago. Truly in a class by themselves, this mid-fi, Bay Area indie trio may ultimately be remembered as a footnote to the career of frontman Sam Coomes, who would eventually helm a considerably more popular band, Quasi.  If that wasn't enough, Coomes also played bass with Portland's Heatmiser, who themselves featured a rising star in Elliott Smith, but I digress.

Out of all his ventures, The Donner Party fascinates me the most, not only by virtue of their small but excellent body of work, but by their strikingly casual and humble tact.  A tact, I might add, which was perfectly conveyed by Coomes fey croon, one that was apt to impart a bevy of wives tale motifs, morbid scenarios, character vignettes, and several benign, offhand references to Satan.  Frequently accompanied on backing vocals by drummer Melanie Clarin, the Donner Party had an endearing chemistry that sinks in the moment their records first grace your ear.

Sonically the band meshes well with early Camper Van Beethoven - a band who-not-so coincidentally released the Donner's second album on their in-house Pitch-a-Tent label.  You can throw in Let's Active for comparison's sake as well, and when D/P really get crankin' (i.e. "John Wilkes Booth") they even forecast the likes of Superchunk. In fact, a lot of territory is covered ranging from punk ("Sickness," "Treepig"), folk ("The Owl of Minerva"), a Sesame Street cover ("Up and Down") and even a dazzling foray into full-tilt bluegrass ("Halo").  And it all works, courtesy of Commes relentless whimsy, wherein mercurial gestures evenly split the difference with the macabre and misanthropic. 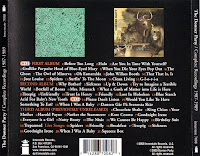 Complete Recordings features their two albums (both self-titled), a third unreleased LP, and closes things out with eight live cuts.  Over 50 songs total (far too numerous to type) but click the tray card scan
to your right.  Below is a breakdown where everything is sourced from.  Enjoy.

Coaxing? You're too kind!

Seeing this post was an absolute delight for me. I'll even it out with you some day. Can't thank you enough for this! I think others will feel the same way, too. Thanks again.

No prob. Pretty much the finest title I've shared this year so far, eh?

Thanks for sharing, excited to check it out!

I like your writing style. It is easy to understand the content of the article.
online classes

I learnt a lot from your blog. It was worth taking time to read the blog. Keep the good work.
dentist in marshall tx

Bought this Complete 2CD on the strength of you posting the 1st album the other week. Somehow they'd passed me by in the 80's.

I am very interested for this post.This site is so helpful. So i want some information for sharing this side with some of my friend. Thanks.
Phoenix University

What a fabulous post this has been. I am grateful to you and expect more number of posts like these. Thank you very much.
online schooling

Thank you so much for posting this. I've had the "Would you like something to eat" song stuck in my head since 1999. Ever since that damn homegrocer.com commercial came out. Tonight was the night I found out what the actual song was. One quick google search and here I am on your blog. You are amazing.

I have to say I am very impressed with the way you efficiently website and your posts are so informative. Many thanks for you. I hope to see you again
Ron Gallemore Retina Macula Institute

I am happy to find your distinguished way of writing the post. Now you make it easy for me to understand and implement the concept. Thank you for the post.
lam seo

Around 18 or so years ago, when I was still playing music, I did a live broadcast in SF with some other singer-songwriter types (John Wesley Harding, Guy Clark) that coincided with a show I was playing (as part of a 4-artist "round robin") at the Great American Music Hall. At one point during the broadcast, the DJ asked us all to pick a song that we'd wish we'd written and to play it. Harding did the Donner Party's "When I Was a Baby". I was blown away by the song and that was my introduction to this great band (I also started covering the song in shows I played in my hometown of NYC, always thanking Harding for turning me on to it). Thanks so much for the post; they were really a singular band with such great, odd songs.

I also saw Harding do "When I Was a Baby" back when he came to Amherst College in...'91? I was totally blown away too, but neglected to note the name of the band, and didn't make the connection until I picked the second album up around '96 in one of my "What's under $3 and got a B+ or better from Christgau?" vinyl trawls. That album became pretty much my favorite album ever for the next five years, and is still in my Top 10...my infinitely obscure band, Denver Zest, tried to cover song after song from it but always gave up because we couldn't do anything with them but pale imitations. At least three or four of our other songs were basically sideways rewrites of these, though.

The other two albums here are really, really good too. "Halo" might be my favorite song Coomes ever wrote. Didn't get to hear them until this CD set came out...I was one of the (hopefully many) people coming up to Coomes and pestering him about a re-issue after Quasi shows, so I like to think that, even if I never managed to pay musical tribute to Donner Party, I did my tiny bit to help nudge this into existence.

Thanks for sharing your thoughts Jesse. "Halo" is a near-mindblower, and I can imagine how difficult it might be to cover. Denver Zest as a band name? Why not. Works for me.

Any chance of reuploading this? The links are down.

well, it seems that today your blog contains what I'm looking for... this is the second request today
Second link is down, and would be nice to have the second album in full, so could it be possible to re-up?

Wow, I have these disks somewhere packed away (am moving), but I am delighted to download these. Thanks.

Melanie Clarin from The Catheads is in this band.

The grocery store wanted to release "Would you like something to eat?" as a single but Coomes refused to change the lyrics. The New Pornographers also cover "When I was a baby" on the B-side of their "Letter from an occupant" single. The great Melanie Clarin is in a bevy of bands, I was lucky enough to see her play with Harm Farm a couple of times. The band broke up when Reinhold Johnson went on to become a brain surgeon .

Can You re-up please?

A blog is very very nice

A blog is very very nice

I am looking forward to reading new articles. Keep up the good work. And Thanks For Sharing !

I guess I am the only one who came here to share my very own experience. Guess what
I am using my laptop for almost the past 2 years, but I had no idea of solving some basic issues.
I do not know how to Free Download But thankfully, I recently visited a website named Crackadvise.Crack