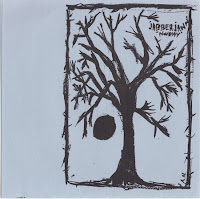 Well, another blog already did more justice to this Cali trio than I'm ever going to, and they even went so far as to share this very record.  From what I can tell, their link isn't functioning, but this is my own rip anyway, so who's keeping track?  With that out of the way  I don't have a copyright date for Novelty, but the mid-90s, say 1994 or '95, would be an excellent guess.  It was around that time I was absolutely besotted with combos like Jawbreaker and Jawbox - both of whom, as it would turn out, had just minted albums that would more than endure the test of time.  The prospect of yet another "jaw" band appealed to my sensibilities, and upon learning of Jabberjaw via an ad and/or review in Maximum Rock and Roll, I hastily whipped out my checkbook (an act, by the way, that I'm not quite as hasty in performing these days).

Upon receipt/review of Novelty, I must have dedicated just one listen to it, because almost immediately thereafter I relegated it to a box where it remained undisturbed for almost twenty years.  My assessment of it now is likely no more charitable than it was back then.  Jabberjaw's ambition was in the right place, but their capabilities were amateurish, doling out dime-a-dozen pop punk missives that might have been salvageable with a different frontman on the mic.  In fairness, Adam (last name undeclared) actually does justice to the record's finale, the fittingly titled "Ending," but when an instrumental ("Two Days") reigns superior above the remainder, something is definitely amiss.  At any rate, you can draw your own conclusion below, and if you happen to find it more stimulating than these ears did, please visit Everything I Could Never Tell You blog for more enlightenment, who by the way lauded Wilfully Obscure in their comments.

any way to get this re-upped? i'm about to post the This Is Fucked This Is Shit comp, went looking for info on Jabberjaw. Found the 90's emo blog, then this post. been reading Willfully Obscure for a few years now.

I was half expecting this band to have common members with Monsula, but it looks like not.

Thanks and take care!

The link has been updated. Thanks for the request.

Hey can you re upload this? Thanks!

hey, is there any chance that you'd be able to reupload this? i can't find this anywhere on the internet besides here. thank you so much for the archive!:)