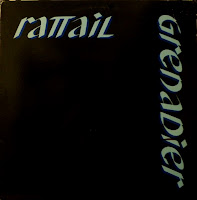 I was introduced to Rattail Grenadier via the crucial, Ben Weasel-curated Punk USA compilation (sound familiar)?  Hailing from Lafayette, IN, the quartet's album was produced by fellow Hoosier, Paul Mahern of Zeros Boys/Datura Seed's renown.  One thing Rattail were not particularly big on was sophistication, and this disk presents a wellspring of dumbed-down themes, proving that the lowbrow bar can always be pushed further south, at least a notch or two.  Sonically, Rattail ranked somewhere amidst early Murphy's Law, the first Screeching Weasel album, and D.R.I., thankfully resisting the latter's metallic urges.  Steve Best's pipes were on the gruff side, but not a dealbreaker, however if there was any member of the band the spoils went to it would clearly be bass wrangler Mass Giorgini who eventually spearheaded his own troupe in the '90s, Squirtgun, and furthermore oversaw the production of zillions of punk records from that era and beyond.

This rip was taken from a rather static-riddled vinyl copy, and despite spending at least a full hour removing the most egregious pops and snaps, sizable portions of it sound less than pristine.  Then again, when the going gets this sophomoric and frivolous you might not notice.  As you're likely to discover, Rattail Grenadier is best absorbed in small increments.


This valuable editorial was very useful to read, I savored it completely. I'm about now to email it to my colleagues to permit them examine this too. Thank you really.

There was not only Mass in this band. In fact, they were just Squirtgun with another singer. All three, Mass, Flav and Lumley played in this band.

"Then she wore that damn Coca-Cola shirt, and I had to blow her brains out!" Grew up in Lafayette and saw these guys live a number of times. Gave me goosebumps hearing this album again...

Would love a re-up if you have the time!