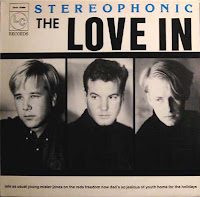 Ok, so this one is kind of a big deal.  I almost opted to save this as an end-of-the-year treat, but I couldn't wait.  The Love In were a magnificent guitar pop trio who had all six feet cemented indelibly into the jangle.  Hailing from the L.A. area, and without much national distribution, the band's lone ep didn't make it onto my radar until someone posted a clip of "Late As Usual" online two years ago.  Was immediately taken, and sought out a copy of my own.  Tore no small amount of hair out in doing so, but earlier this year I finally obtained a factory sealed 12 by 12 inch square of the disk I had been so pining for, from one of the band member's no less (yes, the internet is a handy thing).

As for the ep itself, the Love In waste not a split second of it's roughly 21 minutes, raining down the most spellbinding harmonies you're likely to encounter this side of a Three O'Clock record.  Tom Sheppard's chiming fretboard runs exude a sublime synthesis of Peter Buck and Roger McGuinn, while bassist Kurt Stake's capabilities as a frontman completely seal the deal.  The arpeggio-driven "Late As Usual" functions as a startlingly jawdropping opening salvo, but other nuggets of gold, including the "Young Mr. Jones" and "Dad's So Jealous of Youth" also satisfy at an optimum level.  The Love In is nearly essential as anything Ric Menck's attached his fingerprints to, and should likewise move fans of the Smithereens and Dreams So Real.

A big round of applause goes to Kurt for setting me up with everything.  With any luck there will be more Love In to follow...

There was the Nuggets track "Are You Gonna Be There (At The Love In" (maybe by the Chocolate Watchband), and from your description I am definitely going to be there for this one.

Downloading as I speak (er, write).

Nice one, Spavid. Your research skills are unmatched.

Thanks for the kind words about our little self-produced EP. For the record, Kurt and I switched off on lead vocals - that's Kurt burning up Dad's so Jealous of Youth, On the Reds and Late as Usual, and it's me on Freedom Now, Home for the Holidays and Young Mr. Jones.

BTW, I looked over to the right of your page and saw a link to a piece on the Paley Brothers! Awesome! Andy Paley is a good friend of mine, and we've collaborated over the past few years on a ton of songs for TV shows.

Love your blog, and thanks for nailing the influences on my guitar playing back then.

Here is what I came here to post: Maybe it's because I am in a fragile state of mind (more fragile than usual), but I just listened to this EP this morning, and it seemed very, very good. The musical settings are right down my alley with the chiming guitar work, and while the band has a definite "sound" they avoid the pitfalls of many bands in that there is enough variation in the different songs AND they don't just have one good one. Perhaps because of that "fragile mind" referred to above, the words as they flew by without my really concentrating on them seemed to have some thought behind them and impact on me. Another great share!

Here's what I'm going to add: Wow, one of the band members posts! Congratulations, Tom, I've got more music than I will ever have time to listen to, and I can say that from first listen this one is really very, very good. I wonder if I should know more of what you have done (I realized I could probably use Google), but please feel free to fill us in. Good to see the mention of Andy Paley, too.

Thank you. I needed this.

Tom, thanks so much for checking in, and for clearing up the little dilemma in regards to the vocal quandary. Such a great record, and better yet Kurt says he might have a few more golden Love In nuggets to share at a later date. BTW, what were some of the bands (local and otherwise) that the Love In played with at the time?

Ace, stray fragments from the even the most fragile recesses of your cerebellum are always appreciated here. What would these M/M's be like without you I ask?

Ace, thanks. We had a lot of varied influences at the time, but lyrically the songs tended to have a lot of personal meaning to us. I'm glad to hear the music is still speaking to people. I'm still so proud of The Love In, and what we accomplished at such a young age. As to what I've been up to since the days of the band, I became a writer, working mostly in animation. Started out on a show called Pinky and the Brain, and currently run a show for Cartoon Network called Annoying Orange, which I also co-created. I channel most of my creative energy into my writing, but I work a lot of songs into the shows. I generally write the lyrics and let musical geniuses like Andy Paley handle the music, though occassionally I do both. If you check youtube, you can find me performing a song I wrote for a showtime movie called "The Medicine Show," called "Go to the Light." It's pretty funny.

Spavid, we played a lot of shows with some great bands. At the time we were active, the LA and OC scenes were pretty wildly varied, and since we didn't really fit into any of them, we bounced around on a lot of different types of bills. The Paisley Underground thing (where we probably would have fit nicely) had pretty much come and gone by then. We played shows with No Doubt, Let's Go Bowling, Donkey Show, Gherkin Raucous, L7, Fibonaccis (including one where DJ Bonebrake from X played a marching band bass drum), 3-D Picnic (precursor to Lutefisk), Fishbone, Sylvia Juncosa, Thee Fourgiven, Pat Smear... those are just the ones off the top of my head. If I dig out the old flyers, I can give you a better idea. I remember we played a show at Raji's, and no one showed up... until Screamin' Jay Hawkins walked in (rumor was he lived nearby), said we were too loud, and walked out. Ha!

Anyway, we always had trouble gaining traction in any one scene, which became pretty frustrating, but man was it fun being in that band.

Pinky and the Brain!!! A friend of mine, I would add a music-loving friend of mine, will be thrilled when I mention this on-line connection. For her, the holiday classics include "A Pinky And The Brain Christmas". Her proselytizing led the sons of a friend to become fanatics about the show.

AND that record is really good.

Sorry I wasn't able to respond sooner Tom! Really appreciate your input. Wonder if Gwen Stefani remembers you! Hopefully no doubt were opening for you.

Will have to check out the shows you're working on sometime. Take care.

Any chance you can reupload the link? The link expired.

Hey brother! The link is no longer working for this! Any way you can re-upload this EP? I can only find 2 of the songs of it anywhere online and I'm dying to hear the rest.

Hey I’m new to this space, but I just found this stuff on YouTube and am blown away. I would really like a copy of the EP, because otherwise I’m just listening to “Young Mr. Jones” and “Late As Usual” over and over again. I see that some of the band are in the comments, let me just take this opportunity to tell you how great those two songs are. I’ve been playing them over and over again for the last couple of weeks. Any help obtaining this album would be really appreciated. This is great stuff from a unique era of pop music.

I looked for this as well and found the full EP is now up on YouTube.