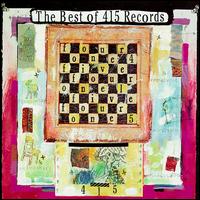 Had a request for this last week, and it's one I'm happy to oblige.  The history of 415 Records goes beyond the five bands represented here, rather Wire Train, Translator, Red Rockers, Romeo Void and Until December were the only ones who appeared on the 415 imprint as a subsidiary to Columbia Records during the label's mid-80s heyday.  Prior to their alignment with was is now Sony Records, the indie-era 415 was also home to SVT, Monkey Rhythm, New Math (later Jet Black Berries), The Uptones, and the rather frivolous Pop-O-Pies.  The Best of 415 Records bypasses these worthy, but lower rung commodities in favor of the first five outfits I rattled off above.

Even under the auspices of a big, bad major label that I'm certain was breathing "sales, sales, sales!" down the neck of founder Howie Klein, 415 Records had an uncanny knack for signing edgy, integrity conscious post-punk acts that happened to possess potential crossover appeal.  An though mainstream success by and large eluded this bygone roster, the 415 logo was a veritable trademark of quality so far as I was concerned.  Averaging about four songs apiece from each group, The Best of... serves as an (in)adequate overview, and doesn't extend much further beyond that.  The relatively obvious "signature songs" are all present and accounted for:  Wire Train's "Chamber of Hellos" Romeo Void's "Never Say Never" and "A Girl in Trouble," Red Rockers "China," and last but not least Translator's "Everywhere That I'm Not."   It's easy for me to quibble over some of the choice moments by many of these groups that were passed over (no "Unalone" by Translator, or Wire Train's jangle-pop moment in the sun, "I'll Do You"?!), but eventually, the individual albums these songs were culled from were reissued in their entirety, thanks in large part to Wounded Bird Records.  Since many of these songs are commercially available again, this may be a limited time share.

I love this CD. It's still the only place you can find Until December on CD.

Until December got reissued as a double CD:

Hi, the file was lost from the link. Seems a server problem. I'll love to have this CD.