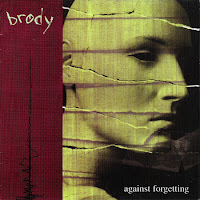 It would seem that Brody's main claim to fame is serving as the launching pad for guitarist Fred Mascherino, who would later go on to replace John Nolan of Taking Back Sunday.  Based in Philly, Brody's run spanned most of the '90s and produced this 7" and a mini-album, Worth Dying For.  "Against Forgetting" is a superlative slice of tuneful emo-punk from that era, that finds Brody subscribing to the aesthetics shared by contemporaries Sense Field and Texas is the Reason.  Cool.  A somewhat shoddy run-through of Don Henley's "Boys of Summer?"  Not so cool, but listenable.  The comparatively lengthy b-side, "Teaspoon" boasts well executed dynamics and for better or worse, is archetypal fare for Brody's genre of choice.  Mascherino has since departed TBS and now resides in The Color Fred.

A1. Against Forgetting
A2. Boys of Summer
B. Teaspoon

It's nice seeing this on here, love everything this man touches.

I do have a request, if you have it. Do you have this out-of-print "best of" collection? It had some unreleased goodies on it...

Oh yeah, The Color Fred seems to be on hiatus, as he's leading yet another group:

As for the 415 Records comp J, I didn't think there was anything particularly scarce on it, but yes, I have it and should be able to get it on here fairly soon. BTW, all the Translator albums were released in their entirety about three years ago:

Thanks for this, I have been seeking out Brody stuff online for years. I thought they had been completely forgotten!

xlpharmacy
Great post! I'm a big fan of Fred Mascherino he's a good guitarist and a perfect songwriter. Thanks for share this with all the community.