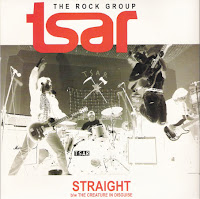 Seems like this just came out yesterday, but it's been more like eight years.  TSAR were a balls-out power pop outfit from L.A. who recorded a spectacular debut in 2000, but failed to follow it up until five years later.  That subsequent abum, Band Girls Money, found Tsar angling in a decidedly rawer, garage-rawk direction with fairly decent results.  Unfortunately, it went nowheresville and the proverbial "dream" slipped away.  I presume they have split up.  "Straight" is culled from that ill-fated record, while the b-side is exclusive to this release.   Close to three years ago, I shared a Tsar promo ep, King of the School, and a radio session, which you can still find here.  In the comments, it was mentioned that some pre-first album demos existed, which I'd love to hear.  If anyone is willing to cough them up, don't be a stranger.

A. Straight
B. The Creature in Disguise

not my cup of tea really this one. Its got good guitar and garage rock sound like you said, but its just still to clean for me

Just tested it out and it worked. Are you getting an error?

Actually, they're back together. I help out on a fan site - www.tsarmy.com . I recommend checking the forums, they're the most current/up to date part of the site.

The pre-debut demos you mentioned were commercially released under the name "The Drugboy Tapes" earlier this year. Available at Amazon/iTunes/etc. There's supposed to be a split-single & an EP coming out "soon".

the link goes to Rapidshare but there's no download link there; just billing info. That seems to be a problem with a lot of blogs that used to use RS. And why RS is losing so much bizness....

Thanks for the heads up on that collection of demos Diggity. Just bought it from Emusic. I actually linked the Tsarmy website in my write-up but didn't check out the "news" section. Looked at the forums. Someone put several like Tsar shows up, but the links have expired. Oh well. Thanks again for the info!

Will see what I can do about the Rapidshare issue.

rapidshare worked fine for me. thanks for the b-side!

Great debut. The first four songs are as good as any power pop album anywhere and the magnificent Girl Who Wouldn't Die as a closer is inspired.

Live pretty ropey and the 2005 follow up you mention was really mediocre.

Lots of talk about Kathy Fong being borrowed by songs since, but the song itself owed a lot to Sweet.

...hey, turns out that there was a Javascript error in their center "DOWNLOAD" button. They fixed it and the free download now works again.

Any chance I can get this and your other Tsar posts reupped? Thanks!

Just updated the link. Will get to the rest of the TSAR links a little later.

I'm not sure how I missed these. Was listening to their classic first CD today, wondering just how a band could go so wrong with their next release. I started looking for live shows/rarities and was led here. Had no idea these existed. No rush uploading the other stuff. I'll keep checking. If I run into anything else of interest by them, I'll shoot you an email. Thanks again for the ups. Much appreciated.