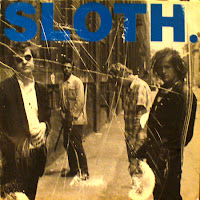 So, the band is from Brooklyn, their album was recorded in Belgium, and it was released on a Belgian label?  What gives?  Since Sloth didn't exactly leave the largest of footprints on the net (though there is a posthumous Myspace site) I really have no explanation for those odd geographic circumstances, but whatever.   On their first and last album, Sloth strike me as being on the same wavelength as Green River, and dialing back a couple of decades, the Stooges.  Not overly derivative of either I should add, but in certain places on Sloth (e.g. "Islamic Judge" and "Zero-ville") I'm also detecting traces of the Mats, Hanoi Rocks, and New York Dolls.  I should note that some of the non-album tracks they're hosting on Myspace smack distinctly of the Stones.  Upon giving this a few spins, I'm still trying to make up my mind if Sloth were employing their full potential, or if that potential still needed some tweaking.   Hopefully upon listening to this you'll draw a more definitive conclusion than I was able to.

Thank you very much for this fantastic album. Great surprise for me. All the best.

I've never heard of Sloth. I like your blog. I'm always on the lookout for obscure bands and I'll be looking for this one.
Wait a few days and play it again.

I knew leader singer Jed in passing at Pratt back in the mid-80's. They were a really good band that suffered from two main problems, 1) they were about 5 years ahead of the times and 2) they were headquartered in Brooklyn long before Brooklyn was considered hip.

Thanks for chiming in mdk.

Any chance for a re-upload for this one? Thanks!