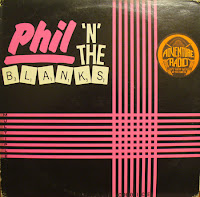 Well, by the looks of things (namely the rather carefree band photo on the back sleeve) I was expecting this co-ed five-piece to rock out somewhere in the vicinity of Blondie.  What I had in store was a little darker and deeper than I expected, but I'm hardly complaining.  Phil 'n' the Blanks sport their fair share of new wave/power pop tendencies, but rhythmically, they wielded a serrated edge that most of their contemporaries couldn't be bothered with.  Vaguely reminiscent of Human Sexual Response, if only for the obvious erotic concerns.  Word is, this crew had a slew of entertaining videos that made the rounds at MTV, right around the time when the station went on the air.  Now we have YouTube.

This is a decent new wave album and a better then the review in Trouser Press made it sound.

My college station aired "My ViSectomy" a lot when this album came out.

xl pharmacy.
I agree , it is a really good band I will download the album as soon as I can , I want to listen it with my new girlfriend !

Hi.
Me again.
Can you make this available again?
We are doing 1981 and have always wanted to hear this album in it's entirety. My local radio station played VIsectomy over and over for a couple weeks and I loved it.
Then I forgot about it.

Please come join us, the offer is still open.