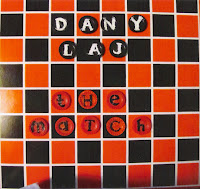 A little birdy passed this one along to me an what a pleasant "tweet" it turned out to be.  Dany Laj (abbreviated for Lajeunesse) is a chap from a small Ontario town who set off to Toronto to create the great American pop album.  Well, come to think of it, The Match isn't actually an American proposition at all, since he's still a Canadian resident, and furthermore this six-song release technically qualifies as an ep, so forget all that "album" nonsense.  What was I thinking?  So yeah, we have the great Canadian ep called The Match, which showcases a budding troubadour who has "raw talent" written all over him.  Laj possesses the same visceral moxie that forebearers Ted Leo, Elvis Costello, and Joel Plaskett made their respective calling cards, and just like that trifecta he makes it sound so damn effortless.  Beyond quality material if you ask me, but listen for yourself.  The Match apparently hasn't hit stores yet, and in fact, a record release party is slated for November 27 at The Piston on Bloor St. in Toronto.  Was so impressed with I heard I thought I'd share the ep in it's entirety (at least for a little while).  Per Laj's corner of  Facebook, he recently toured under Dany Laj and The Look, though I'm not certain if The Look are backing him up on these half dozen tracks.

Did this not work for anyone else?

You can stream it here.

just stop the radio player and click play on the songs... cheers.

You can stream it here at this address

just click on one of the songs and the "radio" player will stop. cheers.

The album continues to break new ground, charting on college radio stations from coast to coast.

So weird. I know this guy. Haven't read your blog for a while.

Some of Canada's finest right here.

is it just me or is the riff from remedy a poor lift of the plimsouls "nickels and dimes?"