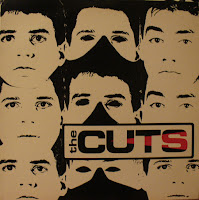 Here's another one in a long list of Ebay misfires.  Well, not a complete misfire anyway.  With The Cuts,  I assumed I was going to be settling in for a good twenty minute steam-bath of raw, unadulterated hardcore, given that this trio looked like they were still attending grade school judging from the inner sleeve pic.  No. I don't think so.  This nascent Vermont set actually had some fairly sophisticated intentions in mind on this self-titled, schizophrenic curiosity of a record.  What I wound up with was weirdo techno pop, that for better or worse didn't subscribe to the typical Anglo conventions of the era.  The Cuts may have been technically proficient, but quality control was given short shrift so far as songwriting was concerned, with lyrical content ranging from the absurdly daft to insipid.  "What About France," which closes out side one is such a cheesy atrocity I gave serious consideration to excluding it entirely.  There's a healthy amount of sax-enhancement on this disk too, courtesy of Eric Jacobs (who also manages the synths), lending additional textures that run the gamut from reggae-lite to cocktail jazz.  Off kilter stuff to say the least, but if anything else, this album confirms there was something resembling life in Vermont other than Phish during the '80s.  BTW, I omitted the title of track eleven below so as not to offend anyone.

I have to get this album
, because according to the things you mentioned in here they're incredible, I had heard that they had been sponsored by safe meds, I want to know it that's truth.

Could you re-up this please? Thanks. :)