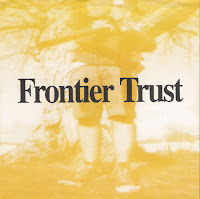 Frontier Trust weren't the only Nebraska natives on the Omaha-based Caulfield Records, but so far as I can tell they were the lone non-emo band on the roster.   I have however seen some "Americana" accusations leveled at this quartet, but Frontier Trust's chunky riffs strike me as a little too muscular to slot them into that genre alone.  I wouldn't be surprised if I was the only one to make this observation, but the gentleman on the mic, Gary Dean Davis is pretty much a dead-ringer for Eleventh Dream Day's Rick Rizzo.  In fact, the untitled lead-off track could have been plucked straight from EDD's Beet album.  I don't know the year of this record's release, but it preceded a full length, Speed Nebraska that's ripe for the picking here.

A1. Untitled
A2. Swimming Hole
B. Another Song About Failure