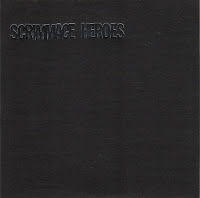 Back in the late '90s when I first encountered gnarly, Orange County pop-punks Scrimmage Heroes, I wasn't aware that Mark Arnold of Big Drill Car had any involvement with them, but from from the research I gleaned over the weekend, that's exactly the case.  Being the decades-long mondo BDC acolyte that I am, a slap to the forehead was in order, but I wasn't too hard on myself, because even though there's been little activity from the Scrimmage camp in almost ten years I can still partake in their records, and this one is particularly riveting.  What you have in store here are three ace slabs of melodious, riff-addled power punk informed by All and the aforementioned BDC, but with the more nuanced tact and pop acumen of Superdrag.  Scrimmage Heroes have a pair of albums under their belt, 1999's Nothing Comes Clean, and the more idiosyncratic 2002 follow-up, The Mighty Insect.  Incidentally the band's name appears in silver Mylar on the front sleeve of this record, but sadly, it failed to translate via my flatbed scanner.

A. Uncomfortable
B1. Mayday
B2. The Chapter on Mermaids