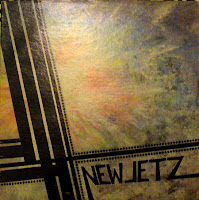 Back after a brief dryspell.  Today I submit to you New Jetz, a Denton, TX six-piece, who's bio on the back sleeve purports to them being an amalgam of post-punk, neo-reggae and power pop.  I'd say they're innocent of the first two charges and vaguely guilty of the latter, with the most egregious evidence manifesting itself via "Flesh Wound" and "Secret."  The promotional photo that accompanies the record depicts three of the five gentlemen Jetz with mustaches.  That can't be new wave can it?  Oh, that's right, they're from Texas.  A full length bio can be read at your leisure on their Myspace page.   BTW, New Jetz was not released on the same Jet Records that delivered us those early Ozzy Osbourne records.  Enjoy (or not).

Thanks for share the link , I really wanted to get the album, when my father finishes to buy viagra online I will have the laptop to me and I will download the album

Can you re-up this please? Thanks.