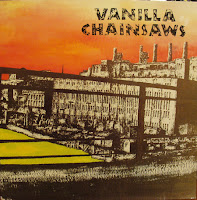 It serves me right for shelving this record for some five years after buying it, without exposing it to a record stylus, that is until this weekend.  Had my act been more together, Vanilla Chainsaw's seamless self-titled set would have been etched into my cranium for the past half a decade.  Call it a case of unconscious self-deprivation.  Whatever.  I still have a few good years left to savor this platter, which is actually a compilation of the Aussie's first volley of singles and their Wine Dark Sea ep from 1988.   At heart, the Chainsaws were an indie guitar band, bearing a dark undercurrent sans any pretension or maudlin antics (i.e. not goth or emo).  Vanilla Chainsaw's ten numbers stitch through the roughewn fabric of Husker Du, Mega City Four and the Godfathers with a unifying needle, though not overly derivative of any of the aforementioned.  Fervent, passionate, and wholly sincere, I would suspect that V/C would be deemed drool-worthy of say, veteran music scribe Jack Rabid.  Big Takeover fare for sure.  These guys really cooked, and I'm compelled to investigate the rest of their catalog.  BTW, the first pressing of this album came with a bonus 7" featuring a pair of early 2-track demos, that I'm also including here.

Frontman Simon "Chainsaw" Drew has pursued a solo career, with a few records under his belt, which you can browse at his virtual store and website, which might still be carrying original copies of this very record in addition to more VC goods.

Listened to the first six tracks so far and this reminds me a lot of the Hoodoo Gurus, but a touch more garage. Really diggin' it!

Hey,
cool choice. This is one of my all-time faves! You can find that record in lotsa stores here for 1 or 2 euros, big shame!
Cheers from Germany,
Doc

thanks. i've always wanted to check these guys out. perhaps i'll enjoy it as much as you did :)

any chances for reuploading this one?

would you re-up please? thanks!