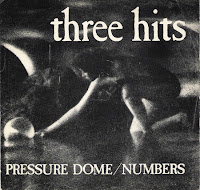 Yes, believe it or not, Atlanta, GA's Hib-Tone Records was responsible for more than just a particular REM 45.  Like so many unsung bands that populate this chunk of cyberspace,  I didn't catch wind of Three Hits until a good two decades after the fact.   Part and parcel of the North Carolina "Comboland" scene, circa the mid to late '80s, this female-fronted quartet delivers jangle-pop nirvana in the form of this singles stunning a-side, "Pressure Dome."  The opposite side of the coin, "Numbers" ponders the wonderful, debt-inducing racket that some of us like to refer to as 'higher education.'  Produced by Don Dixon and recorded at Mitch Easter's Drive-in Studio I might add.

With a revised lineup, Three Hits issued a 1989 ep titled Fire in the House, that I believe you'll also find to your liking.  I'm pretty sure another single followed this one as well.

A. Pressure Dome
B. Numbers

Sweet, thank you! For this one in particular, but also for all the other great stuff you've posted over time. Love your blog!

I'm so glad you discovered Three Hits and thank you for the lovely review! It was a wonderful experience recording these songs with Dixon and having it released on Hib-Tone. I recently met up with Mike Mills in Chapel-Hill and we had a laugh at being "label mates" ("you launched the label and I ran it into the ground!)
Cheers, Sheila Valentine

I've taken a lot of stuff from here in the short time that I've known of it, but this could have been the only thing and I'dve owed you trendously. If I had this on record, it would already be worn out. Finding one of your favorite songs 27 years after the fact is both depressing and encouraging.

Awesome! I can't believe I finally have this. Thank you so much. A question, though: where did all the "...plus" tracks come from?