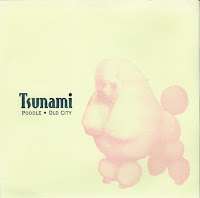 Thought I'd take a moment to fulfill a request.  Although I listened to Tsunami's first two albums, Deep End and The Heart's Tremolo rather incessantly during my college years in the mid-90s, I gave short shift to their 1997 parting shot, Brilliant Mistake, if anything else due to it's lack of immediacy.  After giving this 7" an overdue spin this week, I'm encouraged to reevaluate that record.  While the a-side "Poodle" was culled from the album (and one of it's stronger numbers from what I recall), the flip, "Old City" is exclusive to this wax, and fortunately bears the staying power and resiliency of just about any of their earlier offerings.  For the uninitiated, you can learn more about the co-ed Arlington, VA quartet at Old Fart at Play blog, which includes a thorough discography.  Their back catalog is still available through Dischord, and likely through the usual array of digital retailers. BTW, does anyone have the Cow Arcade tape?

A. Poodle
B. Old City

Thanks for this! I've loved that B-side and hate that it's impossible to find elsewhere--that's why I wanted it!

Fun fact: Jenny Toomey told me that "Old City" is about the band's break-up: if you listen, it's about annoying things, things that happen too often, and the general malaise that they felt about being in a band and doing the usual band things.

Interesting way to tell it!

i am wondering if you happen to have the Liquorice "Stalls" 7" (on Simple Machines) and the promo CD-single "Cheap Cuts" (with a half-dozen outtakes from the Listening Cap album?) i have both--or, rather, have the single and can't switch it to digital, and i can't find the promo CD-single)

I second the request for 'Cow Arcade'!

For a very long time I've been hoping a digitized copy would crop up (as mine was lost in the unfortunate tape deck explosion of 199x).

Tsunami's version of 'She Cracked' was second-to-none.

Does anyone still have this? I'd really like to hear "Old City." I got into Tsunami after liking Liquorice's Listening Cap.