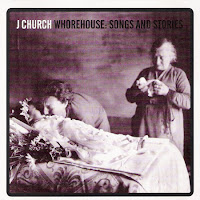 Upon playing just about any given J Church record or CD, it doesn't take long (say, 15 seconds) to remind myself of how remarkably substantive and engaging Lance Hahn and his invariably rotating cast of band-mates were in their prime.  With a sonic aesthetic slightly surpassing lo-fi, heart-on-sleeve lyrical moxie, and plenty of tuneful persuasion, J Church prolifically slugged it out for the better part of two decades on a cornucopia of independent labels before Hahn passed away at the age of 40 in 2007.  Showcasing some of J Church's most concise and visceral moments, Whorehouse... functions more like a compilation than a proper album (see the notes below for the full skinny), but even so, is conveyed with such staggering intelligence and wit that it puts the majority of their '90s punk/hardcore contemporaries to absolute shame. "New Year," "Simple Gesture," and "Accentuated Nothing" are not merely quintessential J Church songs, but the work of a singular, and in my opinion, indispensable talent.  What follows are some notes culled from the discography portion of J Church's website regarding some of the songs contained within:

This was a 'clear out the studio' collection - old songs from all sorts of places gathered together on one album. Three tracks - Guitar Center, Nothing Worth Knowing and The Overwhelming Smell - had already appeared on various compilations. Simple Gesture was also released in the same year on the 'proper' album The Drama Of Alienation, with a slightly different title, but it sounds exactly the same recording so it's confusing as to why it's on both. Asshole is a Beck song, from his K album, and was released as a single a year or two before, while Lance was playing guitar for him on tour. However, the album version is possibly an alternate (new?) take.

Wade plays drums on Guitar Center (unless it's a re-recording) and Reed is on all the other songs. The album title was 'borrowed' and adapted from Hüsker Dü.

can never have too much j church. thanks for sharing!

i loved lance hahn. he always sent the funniest emails. and even though he went through tragedy after tragedy and frustration after frustration, he never seemed to let it get to him. he is sadly missed...and lived a lot of life in his 40 years....

The Shoegaze sounds are from my band Spell 336!

I believe this is the only recording of Asshole we ever did (at least while I was in the band).Thanks for posting this record, it was always one of my favorites.