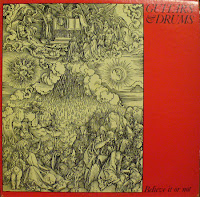 Prior to recording the excellent 1981 cult-classic power-pop platter Direct Hits, Michael Guthrie of the band that band bore his namesake was cranking out beat pop in Germany in the mid-60s with his brother Herb in this little known combo.  According to the handy accompanying bio, Guitars and Drums didn't get serious about hitting the studio until the next decade, and by the time the '80s rolled around they were drumming to a different beat than the British Invasion.  Believe It or Not isn't an overt stab at any genre in particular - punk, power-pop, new wave or otherwise, though the record would have still been a trifle left of center for the likes of Top-40 radio.  "Nightclubland" boasts some faint ska maneuvers a la early Police, but Guthrie doesn't make as nearly an effective case as Sting and Co.  Something similar permeates the song "Guitars and Drums," this time usurping a quotient of Gang of Four's jerky funk mechanizations, sans the choppy six-string bite needed to put this sucker over the top.  Perhaps the most notable selection here is the closing title track, that despite weighing in at over eight minutes possesses the record's strongest hook.

I bought this one about 6 months ago and it's excellent consistent tuneful indie guitar pop rock. Good one...

Never even heard of this. Will check it out.

I think this is really good. I started with the last track and then just let it play in order.

They get a pop riff going and they just keep cooking along. I could imagine this being a band I would have loved to have danced to back in the day (or today by time machine!).

Glad to hear you're digging it...apparently even a bit more than I am.

Brings back memories when I used to watch them in the mid/early 80's live at Sloppy Joe's in Key West. Very inspiring as I was in my teen years. Got to hang with the band, too as my friend, Scott was great friends with them