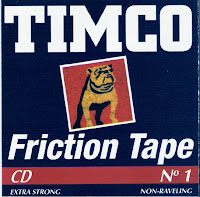 If you already have some familiarity with Timco frontman Kevin Thomson's previous endeavor, that being New York, late '80s noise-mongers Nice Strong Arm, it's to your advantage before delving into Friction Tape, but not particularly essential either.  Adhering to a relatively lucid modus operandi, Timco eschew much of NSA's wailing maelstroms, instead reveling in emotive, and sometimes highly dynamic downer rock, conveyed with splendid indie panache.  Friction Tape is a quieter and more contemplative catharsis if you will, that sonically resembles contemporaries Versus.  Might I also add that Timco inadvertently predated the often tense and conflicted lyrical yearnings of The National, though in a more secluded context.  The trio followed up Friction Tape with the lengthier but less textured Gentlemen Jim in '96.  Timco also had some 7" material that shall be the subject of a future post.  In the meantime you can check out a great Nice Strong Arm platter, Stress City, right here.

Nice post Spavid, I've been wanting to hear me some Timco.

Nothing to do with this post, but do you happen to work at times at a Cambridge, MA used music store?

Just wondering based on a brief conversation I had (would have been longer but for my shyness) with someone on Saturday who exhibited some tastes along your lines.

Nope, sorry. You got the wrong guy. Always nice to know there are people out there with decent taste (and for that, matter actual record stores)!

I just got this cd off of ebay for 4 bucks! Glad I found it as being from Houston I saw Nice Strong Arm play many times live. Some of the greatest concerts I have seen. I Remember Kevin shredding his guitar and breaking 2 or 3 strings in one song. These guys played with passion. I was listening to my old vinyl the other day and decided to see if he was in some other bands. Thanks to your blog I found Timco.

Could you re-up this? Thanks!

Yes, a re-up would be appreciated. Love the thrill of discovery :)