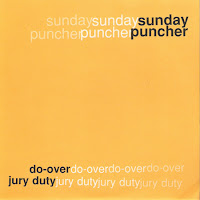 Sunday Puncher were a none-too-celebrated New York by way of Connecticut indie combo who's crooked chords and choppy arrangements put them squarely in league with Polvo and the like, though on this particular 45 Mission of Burma can also be singled out as a notable inspiration.  At the time, S/P garnered a few Bailter Space comparisons, which was convenient considering they were also part of the Turnbuckle Records stable.  Nonetheless the two barely resembled one another.  Ultimately, I'd argue that Sunday Puncher upped the dissonance ante too much for their own good, thus stifling much of their potential charisma.  If this wax does it for you, be content in the knowledge that while they've long since parted S/P are survived by two albums, The Livid Eye in 1997, and For Your Ever Changing World a year later, both available cheap on Amazon, and digitally over on Emusic.  For a quick recap on their career, may I direct you to this brief bio.