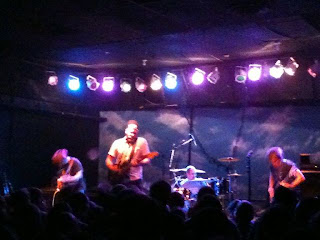 Strike up the band, turn off the random, calling out the A & R...

The indie rock gods must have been smiling a wide-eyed, toothy grin on the evening of January 15th, when Chapel Hill, NC's self-appointed White Trash Heroes, Archers of Loaf took to the stage at the Cat's Cradle to play a surprise reunion gig!  Videos of the completely unannounced (at least from what I understand) show have been floating around on YouTube and a myriad of blogs, etc, but little do most folks know the entire set was also captured to audio by a thoughtful attendee (ok, so maybe that taper had an inkling of what was about to ensue, but who knows).  All those details aside, Eric Bachmann and Co. (who were actually opening for locals The Love Language) plowed through a twelve-song, dream setlist, leaving unsuspecting fans with well more than their moneys worth.  It was their first performance in thirteen years, and from what my ears could tell, it was as if the George W. Bush presidential candidacy hadn't even been imagined yet, let alone fully realized (too bad it didn't stay that way, but I digress).  Truly bitchin'.  Dare I suggest that lighting might strike twice at SXSW next month?

Here's the whole shebang, and if there's enough interest, I can even share this in glorious, lossless FLAC without much inconvenience.

Sort of unannounced, if you weren't paying attention. I was crushed I couldn't go, but they will be playing more shows this summer!

I'm guessing this is my recording since I haven't seen another FLAC version out there. Either way, as many people as possible should hear this. It was a great show and hopefully the rumors about more shows this summer will turn out to be true.

I origially found this on Dime EZ Torrent.

yeah, that's mine then. I'm totally cool with it being shared here too. I got tipped off that AoL were going to play this show early in the week before it happened and it was pretty much as good as anyone could have hoped for.

This is great! Thanks so much.

Wow, thanks. This is a grand story. One of my favs.

They're scheduled for the Sasquatch Festival in WA during Memorial Day weekend. Looks like a pretty good line-up, too. But I'm still holding out for some shows at smaller venues.

Thanks for sharing... the "Slow Worm" file is not working for me; anyone else having problems w/ that one?