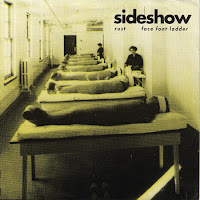 The Midwest proved to be a fertile breeding ground for post-hardcore/emo bands in the mid '90s, and Lincoln, NE's Sideshow were no small exception...except for the fact that they kept a relatively small profile.  Nonetheless, they were one of the flagship bands for local Caulfield Records, who from what I learned at the always informative Built on a Weak Spot blog were actually run by members of Sideshow.  For my money, Sideshow didn't peak until the release of their 1995 signature piece, Lip Read Confusion, but this 7" served as a reasonably enticing appetizer, featuring an early incarnation of "Rust."  Legendary Dischord Records luminaries Rites of Spring and Hoover were a pervasive influence on Sideshow, as both cuts here are saturated with the same constructive catharsis that the aforementioned made their calling cards.  I'm also hearing a little Garden Variety too, coincidental as the case may be.

A. Rust
B. Face Foot Ladder

Lip Read Confusion is great, will have to check out he rest.

Do you come into my house while I sleep and record my favorite records and make them into your blog?

Um...more or less. You and a couple other punks with great taste in music.

Hey. Cool to see some interest in my old band still. Eventually we'll get these songs properly remastered and re-released - but for now, thanks for spreading the sound around.

Thanks for commenting Bernie. Glad to hear you don't object!