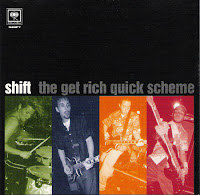 My love affair with the Big Apple's Shift stemmed from an excellent 1994 ep titled Pathos, that only seems to satisfy more with age.  Treading not so lightly in the footsteps of Quicksand, Shift took a slightly milder tact, gently sanding down the more serrated edges of those local post-hardcore stalwarts without blunting the impact.  The band's Spacesuit album followed a year later on Equal Vision Records, and was eventually re-released in identical form for their new homestead, Columbia.  As is most often the case, punk/indie/alt bands that sign to a major label undergo something of an "overhaul," or in this instance, a "shift" (he he).  Enter 1998's Get In, a slightly more commercial venture that didn't lure in the swarms they had hoped for (but I'm sure weren't counting on either), particularly given that Sony's promotion staff was seemingly out to lunch or too busy pushing Oasis albums.  Taken at face value, Get In's emphasis track "I Want to Be Rich," cries out for the type of admiration most big label contenders are pining for, but given Shift's relatively cerebral bent I have to wonder if it's refrain: "I want to be rich beyond my wildest dreams, and I want everyone to love me," was actually spoken of in jest, or at the very least, half irony.  In any case, this promo CD features the song in question, as well as four songs unavailable on Get In, some of which are pretty damn good.  This ep was also issued as a 10" ep if I recall.

I liked Shift as well... Get In was disappointing but had a couple of keepers. Josh Lockua moed to LA and tried to out emote this last album with Big Collapse... the name says everything.

Thanks Rinjo. Didn't know Josh had anything going on after Shift.

Hey,
Fanshala.com is a new portal using which,you can earn money through your Facebook pages.
Fanshala enable's you to earn by simply posting a simple advertisement under your status or post.

Here is how, All you have to do is to sign up on Fanshala.com and follow these steps:
Sign up on Fanshala.com
Follow the instructions given on the site to connect your Facebook page to Fanshala.
Start posting and earning.
It is the easiest way to earn a lot of money in a short span of time.

Shift opened for Mike Watt at Club Toast in Burlington, VT back in 98. They threw this EP out into the audience, and I caught one of the copies. They put on a great show, and I still throw this on in the car from time to time when the songs pop into my head. Distance Machine and Smile were solid tracks, along with the aforementioned I Want To Be Rich. I was disappointed to see that this EP is not available on Spotify, although the other albums are.