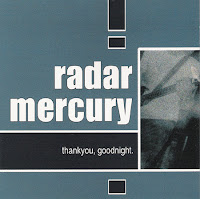 They may have been a blip on the radar (pun intended) but this New Jersey quintet bowled me the hell over with their lone official release, the all too fleeting Thank you, goodnight ep.  Taking obvious cues from such Northeast corridor favorites as Texas is the Reason and the Juliana Theory, the Radar Mercury's synthesis of sturdy musicianship, penetrating hooks and riveting power was par excellence for their chosen genre, which for better or worse, was the trend du jour.  "Million Dollar Messenger Boy" is the barreling fireball that gets things going, and the remainder of Thank you... is just as gripping and potent (then again, with only four tracks there's not much space for things to go off the rails).  Too bad they didn't stick around long enough to grace us with a full length, because their potential here was absolutely staggering.

Of course, there was an obligatory demo tape that made the rounds, and I feel fortunate to have procured one when I saw the Radar Mercury open for Discount in 2000 (or was it '99)?  Like the aforementioned ep, the cassette also featured four songs, with only one, "Nothing's Wrong, Nothing's New" overlapping.  My main beef with it is the excruciatingly poor production (or perhaps a botched digital to analog transfer) and the inordinate tape hiss, which is impossible to ignore.  Better than nothing I suppose, considering this entry includes what would appear to be the Mercury's entire oeuvre.

haven't checked this out but will do so--it was probably 1999, as the only tour that Discount did in 2000 was opening for the Dismemberment Plan, which was their farewell tour...

Hi,
I see you are sharing some rare files that hard to find working link on internet environment..
Would u want to make $$$ from your files ?
I'm owner of fhscout.com and I've been earning $$$ from filehosting sites..
following is screenshot from my filesonic earnings..
http://i54.tinypic.com/k3vn2a.jpg
filesonic offers many plans for affiliates..
one of the hottest is http://www.filesonic.com/elite-program elite program which u can make $12 per sale.. but to this program you can only join by invitation..

depending on country of your visitors & file-sizes you share, I would like to talk more about making money from your files, just contact me at info@fhscout.com

Just updated the links. Thanks for alerting me Denis.

Many, many and many thanks:)

hi spadavid, any chance to reupload this album back?? thanks in advance. :)