Upon news of Jay Bennett's untimely passing last week (May 24), most of the web chatter emphasized his affiliation with heyday era Wilco. Rightfully so, considering he was a driving force behind that band's much heralded Being There through Yankee Hotel Foxtrot albums. While he enjoyed most (if not all) of his commercial success during that period, the news stories and blogs barely touched on his pre-Wilco accomplishments. A longtime riff-broker for Tommy Keene, as well as other alt-pop godheads like Jellyfish and Adam Schmitt, not to mention Sheryl Crow, some of Bennett's finest moments are enshrined on the disks he made with Urbana, IL's couldn't-catch-a-break '90s rawkers Titanic Love Affair. 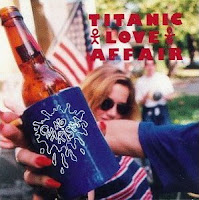 From everything I've been able to glean, Bennett was the guitarist and backing vocalist for TLA (the brunt of the singing was courtesy of a fellow named Ken Hartz who has seemingly disappeared into the ether). TLA's eponymous 1991 debut (which I strongly encourage you to experience) was well received by critics and a modest legion of fans, but no match for the grunge onslaught that was in full swing. The back of the album sleeve was inked by none other than Chris Mars of the Replacements - taken as an entirely fitting gesture to those who lazily approximated TLA to Minneapolis' fab four. Regarding their two later recordings (which I'm featuring here) the similarities are over exaggerated, if anything leaning more towards Tommy Stinson's post-Mats work than Westerberg's. 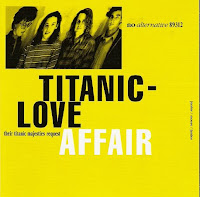 The title of the No Charisma ep was an unscrupulous dig at the label who dumped them after their aforementioned debut failed to set the world on fire. Released on the tiny Crackpot label, it's become something of a scarcity over the years. Earnest and more developed than Titanic Love Affair, Charisma unintentionally predates the vigorous power-pop Superdrag would make their calling card in the not to distant future. Though not as raucous as the ep, TLA's belated swan song, Their Titanic Majesties Request is as earnest and endearing as anything else in their brief cannon. Fans of the Leatherwoods/Todd Newman will really dig this stuff. For a further critique of TLA, Trouser Press is the resource to turn to.

wow-thank you. i didnt know about this.

This is really great stuff. I've been a fan sice the first album came out. According to thier Myspace page there is a complete album recorded that was never released. Apparently Jay had the rights to it and now it can't be legally released. Bummer....I'd really like to hear it.

The links on this post seem to have expired. Do you ever report links? If so, may I make a request for this one? Please let me know. Thanks, Rube

I failed to catch the re-up in early 2015. Possible to do it again? Thanks for what you do.

Hi, could you re up with file please?

could you re upload these albums please?? can't find them anywhere but here. Thnx!