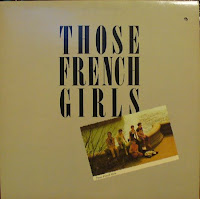 
TFG seemed to emanate from The Vapors/early-Ultravox wing of the new wave clique, but don't quite wield the same charisma. They don't particularly overdo anything here, nor do they dress the part judging from the cover pic, but boy, the feigned Brit accents are about as heavy-handed as they come. An even mix of keyboard and traditional instruments here, with "Corridor" being the album's most stimulating moment. TFG also appeared on a compilation tape with a couple non-LP cuts that you can check out here.
01. Sorry Sorry
02. Diving Board
03. 0-0-0-0-0
04. Punching Windows
05. Close Up
06. Mosquito Bites
07. Corridor
08. Influence
09. Regular Sex
10. Rust
11. Love at First Sight

I just discovered this album is now on Spotify!

I've been going through the old vinyl, and checking what's shown up streaming (so much isn't).

Thanks for the history!

A blast from the past! I was a synth player in a Denny band and went into the studio briefly with then ‘83/‘84 ( caused me to get chucked out my other band) I think that the bass player was John Sharp, Drummer was Gordon and I remember Sean.

The drummer Gordon would have been Gordon Kerr, then of Braehead, Stirling, who was mates with them, however he was our drummer, in DIANA, we played New Wave/Prog and used a Korg MS-20 synth. We supported TFG and some others for a while in the late 70s. Their drummers were Jamie McLennan and mainly Jim Carney.