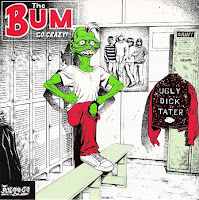 Over the course of three decades or so, the “pop-punk” label has become maligned, overused, and is even something of a pejorative these days – yet when applied to bands that fall into that realm the tag is entirely fitting, even if the music resultant from those bands is less than satisfactory. Victoria, B.C., Canada's Bum weren't merely satisfactory, they were phenomenal. During the early Nineties, this fab-foursome spewed forth a geyser of pummeling power chords tethered to some of the most devastating hooks ever devised by a conglomerate of their ilk. 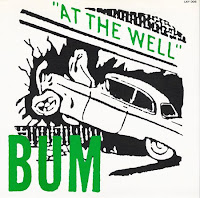 Though they didn’t resemble, or even attempt to mimic Green Day, The Buzzcocks or the Descendants, Bum’s music was equally as substantive as any of the aforementioned. You read that right, Bum were on par with the Buzzcocks. I'm presenting you dear reader with a compendium of most of the groups early singles. This post in is technically a followup to a split 7" with The Smugglers I shared a few weeks ago. Truth be told, the centerpiece for any Bum collection should be their debut LP, Wanna Smash Sensation, easily the most convincing of their three albums, which even contains alternate versions of a couple songs from this self-curated singles collection. 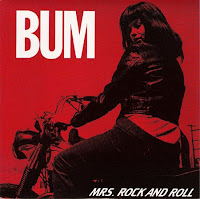 These Canucks had a special place in their collective heart, or more literally. on their b-sides for covers. Some really ace ones to, including hyper-kinetic renditions of The Faces “Pool Hall Richard,” The Misfit’s “Bullet ,” and The Dead Boys oft overlooked “I Won’t Back Down.” As far as Bum's original creations go, you won't do better than instantly gratifying moments like "You're Disciple" and "Mrs. Rock and Roll." Can't believe all of this boss tuneage fell on deaf ears. Dig in and look for more Bum in the not-to-distant-future on these pages. 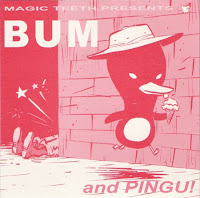 Bum, what a great band. Thanks for this and keepunkrockin'!!
Great blog: not the usual stuff. Un saludo macanudo.

yeah great post.always loved the faces cover.underated band for sure.
dunno if you take requests but of all the blogs i follow yours prob most likely to have this
FABULOUS STINKING CHEMISTRY SET
'LOOK OVER YOUR SHOULDER' 7".
got the vinyl but dont have acess to it at the mo.love to hear it again.great blog by the way.dave p.

Bum, were and still are one of my all time favourite bands, I was lucky living in England, I was so knocked out when I heard the first single I wrote to Andrew and Rob saying next time I come to Seattle, can We hook up there or in Victoria (where they lived at the time) and sure enough they did, fantastic guys, great music what more could you want from a band !
I hope this post gains them new fans as they were sadly overlooked at the time (BIG in spain though ??)
Great post thank you

Didn't think I'd get much of a response to this. Glad you're all enjoying it. Unfotunately David, I don't have the Fabulous Stinking Chemistry Set. You can always try www.gemm.com

Thanks ! I didn't know this collection of singles ! Great job like always !

Oh man, this is so great. I lived in Victoria while Bum were around and saw them numerous times. I really hope you are able to post the "I Am Superwoman" album, because even though I was there when they released it, I never scored myself a copy and I regret it badly. I also didn't have some of these 7"s. I love this blog.

Great post! Now I don't have to convert my Bum 7"s to digital. If anyone is interested, I posted Bum's live CD, Shake Town! on my blog.
http://teenagedogsintrouble.blogspot.com/
Thanks so much!

Can this be reupped one more time? Thank you!