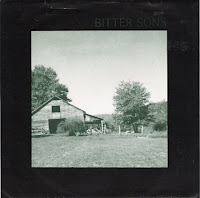 You can take the blogger out of Chapel Hill, NC, but you can't take the Chapel Hill out of the blog. I think this is the third North Carolina related release I've shared this month so far. From the bio insert:


As if it was the intention of any other given band to make poor music. Anyway, this single is actually pretty gratifying. Though Bitter Sons' collective temperament is a bit sobering, it wouldn't really occur to me to stack them up to Big Star. As per their bio, they largely steer clear of their town-mates renown brand of indie-thrash. This was produced by Caleb Southern, the guy that would later do wonders for Ben Folds Five.

A. Ghost of John
B. Deep
https://www68.zippyshare.com/v/RCo1Xwal/file.html
Posted by spavid at 5:56 PM

Matthew McMichaels -- of the Mayflies USA!

Now this is really something I have to hear. Any other Mayflies-related stuff would be loved.

Hi ! Is there any way you could re up this one ? I'm kind of gathering all I can on the indie North Carolina scene and this one, related both to Mayflies USA and Archers of Loaf seems like a must-hear...

Thanks for all the incredible work by the way