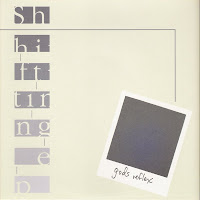 By today's standards God's Reflex Shifting ep would earn itself mid-period emo status, right alongside Sunny Day Real Estate and the first couple of Weakerthans albums. Yeah, that's right, there would be little room for these guys on any given Warped Tour itinerary, or so much as a mention in Alternative Press magazine. No big deal if you ask me, for every "youngsters" loss is our gain. A Rockford, IL quartet fronted by Zachary Newman, God's Reflex released this 7" in 1998, the same year as their debut album, A Brief Lesson In Affection. With A heightened penchant for melody, and just the right amount of post-hardcore vigor, the band easily won over aficionados of Jawbreaker and the like, but never quite made inroads nationally. Shifting features "Careering," later recorded for their second LP, 2000's Scenes From a Motel Seduction, as well as three exclusive cuts. A pretty scarce record these days. Here's a review from A Different Kind of Greatness zine.


God's Reflex issued a much belated follow-up to Scenes, with last year's When It’s Down To This, which you can obtain through their website. For MySpace action and some clips from their latest album, go here.
01. Perfect Blankets for November
02. Dandelion
03. Careering
04. Unfastened In Your Car
https://www120.zippyshare.com/v/3U1NZMYJ/file.html
Posted by spavid at 5:37 PM

I really liked their first full length - thanks for posting this.

You're not in Portland, are you?

Nope, not in Portland, but I've visited there.

Hello,
how are you?
Can you please repost this 7''?
Thank you very much
Stathis

Hi! Can you reupload this 7"? Thanks in advance!