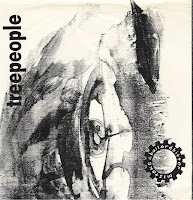 Long before Built to Spill were on every self-respecting, music snob's shortlist, I had the good sense in 1991 or so to take a chance on a cassette by a Boise via Seattle combo dubbed the Treepeople. Little to my knowledge at the time, Treepeople contained in their ranks one Doug Martsch who by the mid-90s would be spilling all that was built to fairly significant acclaim and notoriety. It took me many years to concede that BTS were superior to the Treepeople. This was due in large part to the brilliant melodic, noise-punk (a la vintage Dinosaur Jr) residing in T'peoples bitchin' Something Vicious for Tomorrow, and Just Kidding albums. Both of these were issued on C/Z Records, and are apparently still available. The six songs that this post concerns are extracted from two vinyl-only singles, and as a bonus two additional cuts from a 1993 promo-only ep. 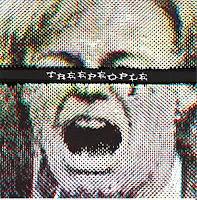 Recorded at roughly the same time as their Toxic Shock Records debut, Guilt, Regret, Embarrassment, "Mistake" was the A-side to a one-off single on the Sonic Bubblegum label, and also happens to be one of the strongest and most representative songs of their nascent period. The flip-side,"Ballard Bitter," named after a Northwest beer, was later rerecorded for Just Kidding. Their second single, from 1992 on C/Z provided a preview of Just Kidding, with it's A-side, "Outside In" later to appear in a different version on the album. The backing "Hide and Find Out," was exclusive to this record. As for the pair of bonus tracks I had mentioned, "Damnation Dawn," and "Flies In my Coffee" (the latter actually a cover of Carly Simon's "You're So Vain") were found on a five-cut C/Z Records promo Treepeople CD that was never released for public consumption. Of course, I own a copy 'cause I'm good like that.

After Doug left Treepeople in 1994 (or around there), the band hobbled on without him, largely in name only, before wisely rechristening themselves as Stuntman.

Wow, thanks. The Treepeople played a live show in my basement in South Bend, IN in 1991. I have to dig out the old photos and post them online one of these days.

I'm very happy I ran into this. Thanks a lot!

i used to have a copy of guilt, regret, embarrassment with more than 12 tracks that are on cds being sold today. do you know what the deal is with this and where i might find the album with more tracks?

also do you know anything about the doug martsch album "i'm still me"? thanks!

I believe that CD with all the bonus tracks was on Toxic Shock records, whereas the rerelease on K (?) had only 12. I have both in a box somewhere.
However, it was a digitised version of "Hide and Find Out" I've been trying to find for ages - and here it is! Thanks heaps!

if you were truly "good like that" you'd be SHARING that 5 cut C/Z Treepeople Promo only CD you raved about!!!

sorry, that sounded harsh. i truly appreciate all that you do share. by far, this is one of my fave blogspots.

"I'm Still Me" is a comp of various Doug Martsch projects all on one disc. I made it when I was like, 14, after collecting all the rarities I could find at the time. It's not an official release.

Could you please re-up these cool singles?

Thanks for these. I appreciate it. Will you ever be willing to up the 5-track promo CD you talked about? I, too, bought that "cassette" many years ago. Actually, in 1989 shortly after their move to Seattle. The shows they were playing in Seattle were 21 and over and we couldn't see them. So, we went over and stood outside one of their shows and convinced the band to take the ferry over to Bremerton some time to play a show in a friends basement (I saw Doughboys in his basement!). They got lost, but we found them at a gas station and they preceded to play two amazing sets. I bought the tape from them and their important things 7". I just have to track down that 7". Thanks for a walk down memory lane...