Map of the World - An Inch Equals a Thousand Miles ep (1989, Atlantic) 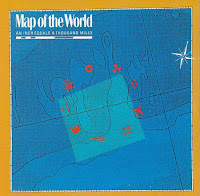 Yet more long-lost, left-of-the-dial ear candy. Map of the World vocalist Sophia Hanifi, with brother Khalid occupying the other mic and guitar, offer superb musicianship and vaguely narrative songs, reminiscent of such eclectic troupes as Fetchin Bones and The Swimming Pool Q’s…if that means anything to you. As was the case with a plethora of Atlantic Record signees during the ‘80s, the label’s promotion department was a no-show, what with being preoccupied with Debbie Gibson and Winger. The six-cut An Inch Equals a Thousand Miles was their only major label recording.


Highlights here entail the organ-driven stomper, “The Wall of Least Resistance,” and the penultimate “Stop Thinking Now.” Check out the Map’s website (hyperlinked above) for a discography and copious reviews of their meager output.

I still have this CD and I still love it! I can always count on your blog to remind me of the good ol' radio days! Every time I visit, I see something new I'd forgotten about. Thanks for the memories.

I have The Wall of Least Resistance from WRIF Steve Costan's Sonic (how do you spell) Rendevous.
I'd record on cassette tape. Now, I'm trying to hunt down a buy all those great songs!

One day my ship slowly begins to sink.
The ocean shows me what I'm afraid to think.
Water rushes in and pushes out my hope.
I come to realize I've been kept afloat.
(A warning to all: If the Media makes you, the Media can break you)

LOVE this record...been listening to it since my late 80's college radio days...check out more of Khalid Hanifi's CD's...you can find them on Ebay!