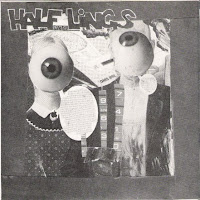 This post is dedicated to my buddy Steve Neurotic over at his newly minted Punk Archives blog. The Halflings were a mid-90s trio from Pennsylvania, that to my knowledge didn't release a full-length, rather a handful of singles. Raw, and sometimes even a bit chaotic, The Halflings were clearly the disciples of such punk luminaries as Screeching Weasel, The Queers, and as evidenced by "Spawn," from the Frabbajabba 7", Operation Ivy as well. Plenty o' three-chord joy to indulge in here folks. 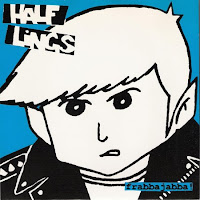 The self-titled single and Frabbajabba were released on Creep Records. " A Kiss for Christmas" came out on the Suezdinis label. All long out of print and sold out for years I'm sure. 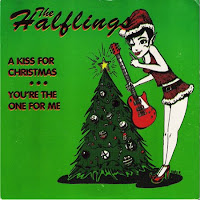 It's always heartening to see somebody else go on about those mid-90's pop-punk bands. Amidst all the derivative ephemera of the era there are still brilliant little finds.
"Memory Lapse" is an archetypal ripping, yet self-deprecating, pop-punk song.

thanks for posting this
i just found my copy of frabbajabba when schlepping all my stuff from my dads house. too bad i don't have a record player anymore :P

Creep Records reopened. out of west chester pa and into phoenixville.

I was at a party saturday night reminiscing of the old days. Nobody remembered and Riverdales songs. Or even Bouncing Souls. I felt old.

I first saw them play at the Barn Door in wilmington with the Boils when Amy was still singing for them. George (lead voc) is now doing his 1-man band Toothless George, and has a rockabilly band too, the Bedrockers.

i have these 3 records too. great stuff. i may have a few pics from a tour they did down in Florida, where i saw them in Orlando. Matt and the Teen Idols used to stay at our place there whenever they were on tour. good people and great times....

Yeah I started halflings with george after our old band mao and the chinese revolution broke up these comments are great.

I saw the Halflings with the Parasites and the Grumpies in a bar in Starkville, Mississippi. It was AWESOME. I got the Xmas single and Frabbajabba. They were an amazing band that blew me away and were head & shoulders better than most bands kicking around back then.

just got into this after you reupped it, good stuff, thanks for this and all you do!

Could you reupload again please, and also do you have anything by "The Bedrockers", and Tootless George stuff? thanx.