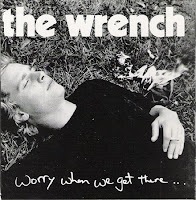 It should be of little surprise that Buffalo's departed Wrench (formally Monkeywrench, before some certain Seattle luminaries forced them to truncate their moniker) followed in the footsteps of Queen City kingpins, the Goo Goo Dolls. Additionally, it shouldn't be much of a shock to see a production credit to Robby "Goo" Takac on the tray card of the Wrench's one and only album, Worry When We Get There. No power ballad's here mind you, rather the strain of full-tilt, melodicore punk that used to frequent the Goo's earliest and greatest albums like Jed and Hold Me Up. Moreover, mouthpiece Timo and company smack of Big Drill Car, albeit a tad more pedestrian. In fact, Timo could even be mistaken for BDC's Frank Daly at times. In a nutshell, The Wrench were perfectly tailored for the corner bar and the half-pipe. 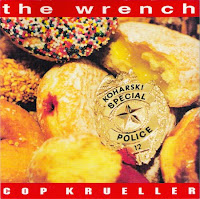 hmm, early goo goo dolls and big drill car comparisons, and this band seems to have escaped my radar until now. can't wait to give this a listen!
thanx!

TImo was (and still is) one of the coolest people from the '90s B-lo music scene.

I knew the members, did some work for them in the 90's worked w/ scott and eileen at BKwik

Saw these guys a number of times back in the 90's and even went to school with the guy on the album cover (though he was quite a bit older than me...he lived just up the street).

"Girl" was a popular song among my high school friends, and my old band used to play it occasionally.

Kind of sad the Wrench never put out more stuff.

Awesome stuff. Hey didn't they put something out as Monkey Wrench like a demo or something? Never made much sense to me to change the name, these guys fromed in 1989 and Mark Arm's band formed in 1991. Hard to believe anything with Tim Kerr would be fucking anybody over.

Love this! Reminds me of a lot of the Dr. Strange stuff from the early-to-mid 90s... i.e. Brown Lobster Tank. Thanks for sharing!

They just released a new album. Find it here http://www.monkeywrenchband.com/

They are remastering their back catalog for re-release soon.

reissue of cop krueller, some other old stuff and a new album here:

I saw them a few times performing with Scary Chicken back in the day. Can you please re-upload "Worry When We Get There" if you have the opportunity? Thank you very much!