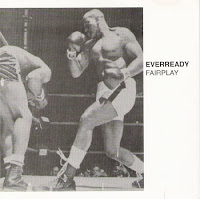 Everready were a southern Cali punk aggregation that gestated four albums and a zillion singles throughout the '90s, but you'd be hard pressed to find anyone today, quite likely even on their home turf, that remembers who the hell they are. Enamored as I was with them at the time, I have to admit their music doesn't quite have the staying power of like minded, powerhouse contemporaries Face to Face and Screeching Weasel. Everready inarguably took their cues from the aforementioned, and to a lesser extent, Chicago's barn-burning Naked Raygun.


Even though Fairplay was technically a demo (their proper debut album, Reinheitsgebot was issued in 1996) it's my favorite Everready offering. A bit sophomoric in spots, true, but this trio possessed some serious chops, and were genuinely unscrupulous when it came to the "snotty" factor, in an era mind you, of MTV punk-pap poseurs. A cover of the old Johnny Nash soul standard "I Can See Clearly" is erroneously credited to Screeching Weasel, granted Everready usurped SW's arrangement of the song. Their hearts were in the right place, I'm sure.

actually reinheit... came out like inlate 1994 or in 1995 cuz i had a copy in mid 1995, it was one of my fave alltime CD's while my friends were to busy listening to offspring i was listening to sicko, the queers, connie dungs....etc... but yea that album came out around that time i remember well cuz my mom passwe away in late 95 and "maricel song" makes me think of her even to this day, thanks for posting this!!!!!!!

I loved Everready, I used to have a copy of "Reinheitsgebot" that I got as a review copy, and it was great.

I still have 3 or 4 Everready singles kicking around, though it's been a while since I've listened to 'em. They're a few posts down the road...

Thanks for the correction Tom. Must have been at least late '95. I've got a bunch of Everready singles too, but am in no big hurry to post them.

Ah, loved this album. Liked it better than the others, actually. The bass playing in "Whatever" and the guitar lead in "At the Che" and on and on.

Hello,
can you please repost this LP?
Thank you very much
Stathis