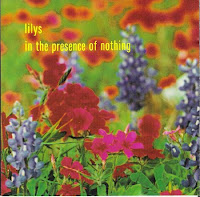 The Lilys are the last of a dying breed. With a resume that spans two decades, the band has never made the same album twice. Let alone the weirdness of their debut, In the Presence of Nothing, The Lilys went the ambient route on Eccsame the Photon Band in 1995, brought forth a brilliant Merseybeat-revival masterwork in the form of 1996's Better Can't Make Your Life Better, and by the new millennium, were making fairly straightforward (and frankly, kinda boring) records like Precollection. Helmed by one Kurt Heasley, The Lilys chameleon-like dexterity lent itself nicely to Presence, an album that bowed downed to dream-pop gods My Bloody Valentine. If Loveless was the main course, the Lily's crooked homage was the after-dinner mint...and a sometimes sour one at that.


Heavy-handed to say the least, Heasley and his crew brew up a smoldering, swarmy swill here, wherein over-flanged strings are the primary backdrop to an unwieldy predisposition for dynamics, and even the occasional sublime hook. The third song in, "Collider," driven by a disarmingly ethereal harmony, is almost an anomaly. "Tone Bender" is a dichotomy of the Lily's ferocious rhythm section, rubbing shoulders with the songs more listener-friendly attributes evidenced in the aforementioned "Collider." In fact, much of Presence is a veritable conflict between these two diverging paths. Unarguably, the album's sheer dissonance makes for a challenging listen, but truth be told, the only selection I wish the Lilys had eschewed is the meandering 12-minute instrumental "The Way Snowflakes Fall." Luckily, they redeem themselves by following it up with the comparatively poppy "Threw a Day," which wouldn't have sounded out of place on Sonic Youth's Daydream Nation.

Now available on Bandcamp.
Posted by spavid at 4:58 PM

I played this album so much when it came out! Archie Moore from Velocity Girl was a member on this record. Do you have the February 14th single? Amazing! 10 years ago, the drummer from Spavid (ever hear of them?) was living in Philly and thought I should move there and be in the Lilys. That would have been funny!

Why yes I do! It might make an appearance on here with some other Lilys singles.

It's great that you posted about this album, because it's one of the gems in my collection--mostly because it is so hard to find. That said, I've never been a huge fan of it because it is quite derivative, and not in a good way like, say, Chapterhouse's "Whirlpool" was derivative. (Along those lines, you could do a day on the "Rounderbowt" compilation that is unavailable almost anywhere these days.) Still, "Claire Hates Me" is pretty darn excellent!

thanks so much for posting this beautiful album!!!

this blog is awesome!!!

Hey look. It's J and E! This was and I think still is a really important record to me. Can't really say why. Although Loveless is impeccable, this seemed more graspable made by people I could be and was (later) linked to. Made for probably 1% of what Loveless cost. Still probably the record of my dreams made real as a 17 year old and sonically totally amazing.

The great thing about this record besides the fact that it changed my life, is that it cost roughly 1000 dollars to make vs "Loveless" costing over 100,000. That is punk and brought the possibility of actually being in a band a reality to me. In some ways I think it sounds better than "Loveless." Or I guess more american or more real. It all came together last Fall when Kevin Shields asked the Lilys to play ATP. It all made sense then.

This record is a gem! It gets the obvious comparisons, but, it has so much more of a realness and edge to it. Sometimes a smaller budget and time frame are your friends and make for a better result. It stands apart and has it's own magic. My personal lilys favorite - it seems to perfectly capture what was going on then. Maybe I'm biased, I helped with it. No, it is really good!