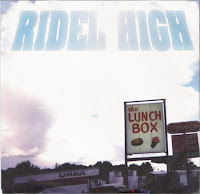 Maybe Kevin Ridel was destine to toil in obscurity. You think he would've had a good thing going when he moved to L.A. in 1989, accompanying Rivers Cuomo in the precursor to Weezer, Avant Garde, but he didn't quite gravitate into the lineup of the world-class rockers to be. However, by 1995, Kevin was fronting a powerhouse of equal proportions, Ridel High, who released the single in question. The band unleashed a magnificent riff-addled power-pop album, Hi Scores on the My Records label in 1997, and a year later inked a deal with A&M Records. Emotional Rollercoaster (essentially a refurbished version of Hi Scores) was released with little fanfare. The A-side, "Mouthful of You," a paean to lip-locked infatuation, would be rerecorded for Rollercoaster.


More obscurity ensued , and although Ridel High would split soon after, he attracted a small but devout following, who were anxiously anticipating an album by his next project, Peel. Peel's debut, Blindside was locked, loaded...but not quite fired. In fact, Ridel and Co. were fired from their new home, Beyond Music, when the label was bought out.


And onto to strike three. AM Radio was Ridel's next venture, a band none-too-dissimilar from his recent endeavors. After a smattering of demos were shared online, AM Radio released Radioactive on Elektra in 2003. Additionally, they were managed by none other than Rivers Cuomo. "I Just Wanna Be Loved" was featured on the WB's Smallville, but despite the captive audience, Radioactive didn't quite fly off the shelf. Kevin has since immersed himself in the world of Christian rock.


In addition to this single and RH's Rollercoaster, an extremely limited CD of Ridel High rarities and demos dubbed Recycle Bin, was issued at the turn of the century. I'm taking requests if anyone is interested. BTW, the unreleased Blindside can be obtained through the Peel hyperlink two paragraphs above.
A. Mouthful of You
B. Wynona Ryder
http://www88.zippyshare.com/v/tzxQ5gSU/file.html
Posted by spavid at 6:35 PM

"High Scores" is an unsung classic with at least 4 or 5 songs that could have been radio hits. A.M. Radio weren't as good, but that one Ridel High record really was terrific.

Thank you so much for this - I really had almost forgotten how great Ridel High was. I would love to hear the rarities collection if you ever want to upload it.

Loving your blog! Thanks for The Peel tip - totally unknown to me. I too would very much like to hear the RH rarities...

dang! i have this record somewhere...you know Kevin has all but retired from pop music and is now married and producing (to what degree i dunno) christian worship music. and last i talked with him he was doing well...and that was earlier this summer. that guy is super nice.

Hey, I'm the blogger who's hosting the Peel album that you linked to. I just wanna say that everyone who's interested in Ridel High and AM Radio definitely needs to check the Peel "Blindside" record out, it's a masterpiece and the label was stupid not to put it out.

According to Kevin's MySpace, he and Jason are currently recording a new AM Radio album! Also, Kevin is reissuing AM Radio's Japan-only "Reactive" CD on CD Baby, and possibly "Blindside" as well.

So, I know this is old, but I'd really like to hear more of this band, and Peel, and the blog linked in this article is gone...help a brother out?

I second Jeff's comment below. I have really bad MP3s (96kbs) I downloaded of the Peel album (not the whole thing, but 8 tracks or so) but I remember absolutely loving them. I have all Ridel High's stuff... including the Rarities album (which interestingly enough was a just a professionally reproduced CD-R), Kevin also sent me a patch and some promo shots...it's all somewhere @ my dad's. Anyway, I digress... Any chance you can post the Peel album up here?

The blog rocks. I check it practically daily. Thanks!

Can we get an reup of Peel, please?