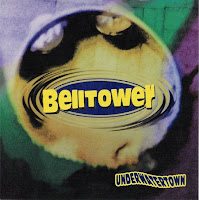 Their sweet, ringing shoegazer rock aside, The Belltower had a couple of pre and post notoriety points going for them to boot. Singer Britta Phillips was the voice behind '80s chick cartoon Jem. A few years after the animated program ended, she teamed up with pre-Fountains of Wayne axe-slinger Jody Porter in the New York based, Belltower a highly promising dream-pop protege band of sorts, that released a lauded, but woefully underpromoted major label album, Popdropper in 1992. In addition to the album, The Belltower released a handful of independently released eps, which may be a subject for a future post.


To my knowledge, this two cut single on the Chicago Scratchie Records label was their final hurrah, and boy did they go out in a blaze of glory with the hypnotically enthralling a-side, "Underwatertown." The flipside, "Orbit," on the other hand is laughably brief, clocking in at a mere 86 seconds. Needless to say it didn't quite do the band justice, but "Underwatertown," is still pretty decent compensation. Britta Phillips would further her music career in Luna, and later as a duo with husband Dean Wareham.

Just updated with a Rapidshare link that should be functioning.

Porter and Phillips were married while in the Belltower. I've never heard anything by this band, so thanks for the introduction.