The Heavy Blinkers - Hooray For Everything (1998) 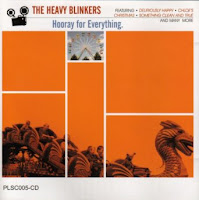 For fans and critics alike of this exceedingly scarce album, Hooray for Everything isn't the Halifax-based Heavy Blinkers proper debut album, so much as a solo project for it's architect, Jason MacIsaac. Being familiar with the Blinker's entire catalog, I have to agree and disagree with this assertion. Before opining any further, I don't personally own a copy of Hooray For Everything as it's truly impossible to come by, save for the occasional, not to mention expensive Ebay listing. Since I can't refer to the credits, I'm making an educated guess that MacIsaac play most or all of the instruments here. Despite that likely prospect, Hooray generally exudes the palpability of a full-fledged outfit. However, with the exception of perhaps "Something Clean and True," and "Deliriously Happy," what Hooray lacks are the buoyant harmonies and orchestral grandeur that would become calling cards for the Heavy Blinkers on subsequent records, namely their 2000 self-titled stunner, and Better Weather two years later. In other words, the Spector-esque "magic" didn't really kick in until MacIsaac bolstered his lineup (with rising star Ruth Minnikin among others), shortly after releasing this debut. Taking all of this into account, this was a respectable and interesting precursor of the much more rewarding music from the Blinkers to come.

The original line-up has altered but the fifth album is on its' way. MacIsaac is working hard. Great article!

(P.S. Your Myspace link is for the other Haligonian named Jason MacIsaac. The Heavy Blinker uses this one.

Also, their permanent site is temporarily down but you can check out this in the meantime!)

Thanks for the heads up Melanie. I was gonna say, that really didn't sound like Jason. I'll have to update my post when I get home from work.

Hey friend,
Thanks so much for the shout-out about HOORAY FOR EVERYTHING!. I really appreciate your taking the time to write about it, and I hope like hell that you enjoy the new album. You have a great site and I have bookmarked it and will be routinely visiting.
thanks again
Jason

I was living in Halifax when this album came out. I love this album and their other ones. Great stuff. Glad to see you posted it.